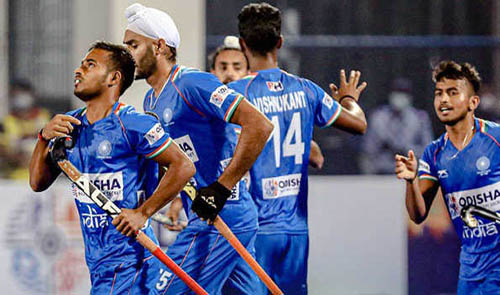 Bhubaneswar,  (UNI) Defending Champions India thrashed Canada by 13-1 in the must-win Pool B match of the FIH Junior Men's Hockey World Cup at the Kalinga stadium here on Thursday. With the victory, the Indian colts extended their all time head-to-head record to 5-0 against Canada.

India started off well, putting the demons of the 4-5 loss against France on November 24 to rest. Uttam Singh gave the hosts an early lead in the third minute. Maninder Singh's cool and calm assist helped Uttam slap a perfect field goal. Uttam tried to convert another opportunity into goal but he ended up slipping while extending his stick.

India captain Vivek Sagar Prasad netted his team's second goal in the eighth minute as he tapped the ball over the stick of the opponent to scoop it into the net. Canada earned two back-to-back penalty corners but confident India, which were playing their second game in less than 24 hours, saved on both the occasions. India could have extended the score but missed the final touches before the end of first quarter.

Soon into the second quarter, Sanjay made no mistake to convert a penalty stroke into another goal in the 17th minute. Vishnukant Singh displayed some good stick work en-route to taking a shot but unfortunately the ball hit his teammate Uttam, who limped off the ground. Maninder, too, joined the party and netted India's fourth goal in the 27th minute.

With less than one minute to first half, Canada earned a penalty corner. Christopher Tardif dragged the ball and opened the account of Canada just before the hooter signalled half-time, with India leading 4-1 against Canada.

India earned a penalty corner in the third quarter and Sanjay with a dragflick scored his second goal of the game in the 32nd minute. Shardanand Tiwari and Araijeet Singh Hundal converted two back-to-back penalty corners into goals in the 35th and 40th minute, respectively. In the all important Pool B match, India ended the third quarter with 7 goals to Canada's one goal.

India ruthlessly dominated Canada in the final quarter, scoring six more goals. The hosts showcased brilliant defence and kept the custodians of Canada under tremendous pressure. Uttam scored his second goal of the game, while Araijeet netted two goals in the space of just two minutes.

Shardanand joined the assault with his second goal for the day as he dragflickled a penalty corner. Abhishek Lakra joined the party with his brilliant goal and Sanjay completed his yet another hat-trick to finish off India's game in style.