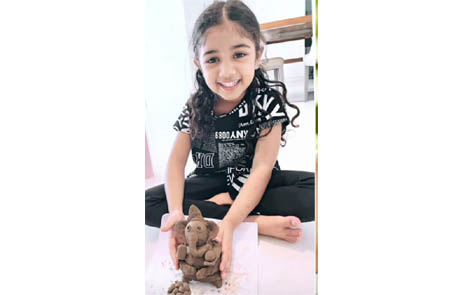 Ganesh Chaturthi is celebrated as the birthday of Lord Ganesha. The day is also known as Vinayaka Chaturthi. This year, the festival starts from today September 10, 2021. The celebration is 10 days long, where on day 1 people install the Ganesha idol at home or pandals and worship it for the next 10 days. On the last day of the celebration, the virsarjan of the idol is done.
On the occasion of Vinayaka Chaturthi, Allu Arjun's daughter Allu Arha is making her own clay Ganpati. A picture of the Pushpa actor’s daughter Arha, making eco-friendly Ganesha idol at home is going viral on social media.
She created a mini-idol at home to mark the festival. The handmade eco-friendly Ganpati idol is then seen seated on white paper alongside steamed rice dumplings. She can be seen dressed in black pyjamas.
Allu is busy shooting for his upcoming film Pushpa. The upcoming flick is scheduled to release in two parts. The first part is slated to release in this Christmas, December 25. Directed by Sukumar, the film also stars Anasuya, Jagapathi Babu, Prakash Raj, Dhananjay, Sunil, Harish Uthaman, and Vennela Kishore in other important roles. The multilingual action-thriller will be released in Telugu along with Tamil, Hindi, Kannada and Malayalam languages.
Meanwhile, Arha will be making her debut in Tollywood with Shaakuntalam. She plays the role of Prince Bharata in the upcoming project. The movie stars Samantha Akkineni in the titular role of Shakuntala and Malayalam actor Dev Mohan will be seen as King Dushyant.  It is directed by Gunasekhar and he is also bankrolling the film under his home banner Gunaa Teamworks.