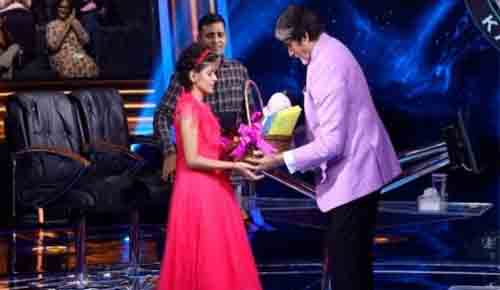 The latest episode of the show Kaun Banega Crorepati 13 hosted by Amitabh Bachchan had a contestant named Oshin Patwa, who is a social media influencer.  There was also a special guest in the episode under the segment ‘Asha Abhilasha’ and she was seen asking interesting questions to the host. The guest is a young girl diagnosed with Cancer and undergoing treatment.
As per the last episode of the quiz show, Oshin was seen on the hot seat as Amitabh Bachchan started the game by asking her questions one after the other. Oshin played the game and used up all four of the lifelines available in the first few questions. She took Audience Poll to answer the Rs 10,000 question which was based on a video clip.
Going further, Oshin used the Flip The Question lifeline to answer the seventh question and then chose to use ‘Ask The Expert’ to answer another question. She won Rs 40,000 after taking the expert’s advice on the question based on Oscars.
Moving ahead, Oshin went on to win Rs 6,40,000. However, she chose to quit when she couldn’t answer the next question.
After her exit, Mr. Bachchan introduced the audience to Kaun Banega Crorepati 13’s new segment ‘Asha Abhilasha’ which has been specially created to honour the dreams of people. Following the introduction, he welcomed a young girl Anjali Tiwari, who is undergoing Cancer treatment.
Anjali entered the show with her father and was seen asking fun questions to Big B. She asked him if he ever got punished in school and he revealed the kind of punishments that he used to get in his school days.
She also asked Mr. Bachchan how does he know the answers to all the questions asked in the game. To this, the host revealed that he doesn’t know the answer of even a single question. “Samne baithne wale ko lagta hai ki hum kuch bata denge. Lekin humko kuch nahi aata,” he added.
Anjali was also seen praising Amitabh Bachchan for his voice and singing. She requested him to sing a song for her. While Mr. Bachchan said that he has no singing skills at first, but he finally sang his popular song ‘Rang Barse’ for her.