An IPS engaged in the battle to bring back Muskan 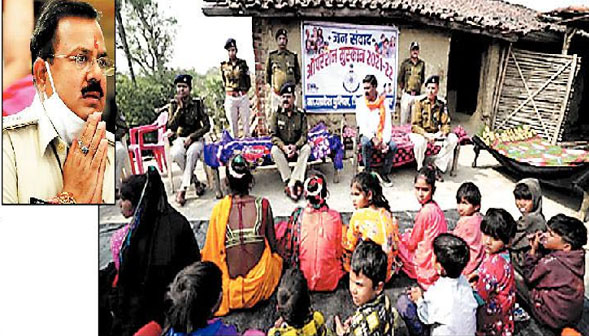 Pushpendra Vaidya, Indore
Police Captain IPS Manoj Kumar Singh of Alirajpur district is being identified as the SP who brought back Muskan (the smile). Under the 'Operation Muskaan' of the Madhya Pradesh government, the police in Alirajpur district has earned the title of returning the smiles of the children by finding the missing kids in record time. In just a few months, the police recovered 94 per cent of the missing or kidnapped children in the district.
Chief Minister Shivraj Singh Chouhan has launched a special campaign 'Operation Muskaan' in Madhya Pradesh to nab the criminals and fast track such children. Singh, the superintendent of police of Alirajpur district, is serious about this campaign. What one of the victims told in conversation with Navbharat was goose bumps. The victim told that some people kidnapped her from her own village and took her to Gujarat. Held her hostage there. Tried to kill her by throwing her in the river. Her video was made viral. If the police did not come on time, then do not know what kind of atrocities would have to be endured. After recovering this 14-year-old minor girl, the police not only brought back a smile on her face but also on the faces of the entire family.
A similar story is also of another daughter. After the sudden disappearance of the girl, there was mourning in the family. As soon as the news of the kidnapping of the girl was received, the Alirajpur police immediately reached the spot and started investigation with all seriousness. The hard work of the police paid off and the smile returned to the face of the lost daughter. When the police took the daughter home and handed her over to her family respectfully, tears of happiness came from the eyes of the whole family.
Alirajpur district has 89 per cent tribal population. According to the NITI Aayog index, 71 percent of the people are poor here and the country's lowest education rate is 36.6 percent. The good thing is that the sex ratio here is very good. Here there are 1009 females for 1000 males. The main reason for this is the reverse dowry system. That is, the girl's family has to give money on behalf of the boy's family. Due to poverty and illiteracy in the neighboring state of Gujarat, many girls here become victims of incidents like kidnapping and rape while working.
SP Manoj Kumar Singh has kept this campaign on his priority in the district. When a victim's family came in front of Manoj Kumar Singh for the first time, he decided on the same day that he would work hard under Operation Muskaan. For this they have formed special teams. He also monitors himself every day. As a result of this, in the last few months, the police have worked tirelessly and recovered 94 percent of the children during Operation Muskaan. In one year, 151 missing or kidnapping cases were registered, out of which 142 children were recovered.
Singh is known for social policing. To connect directly with the people, they themselves go ahead and connect with the public. Even going to the tribal area, he plays marbles with the children. Establish a dialogue with the people by setting up a chupal.

Version
When we hand over the lost children to their families, tears of joy are seen in their eyes. I am relieved to see the smile on their faces. I have taken this campaign as my top priority. Committed to giving respect to daughters in this area and keeping them free from any crime.
Manoj Kumar Singh, SP, Alirajpur