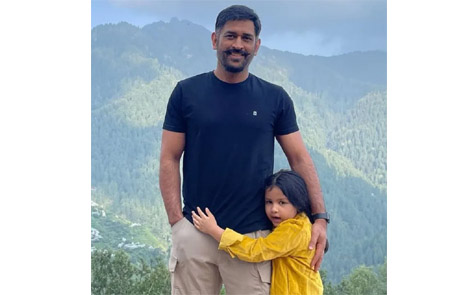 The Chennai Super Kings (CSK) has entered the Indian Premier League (IPL) final after defeating Delhi Capitals by four wickets in the first qualifier at the Dubai International Stadium on Sunday. CSK’s entry into the IPL finals after a tense match has made MS Dhoni fans overjoyed and super excited. Joining them in their celebration is Dhoni’s daughter Ziva. Recently, the cricketer’s wife Sakshi Singh Dhoni took to her social media and posted a video of Ziva making her way to her dad, as he arrives with the team after their superb victory.
Taking to her Instagram space, Sakshi Dhoni posted a reel, where we see the team in yellow walk inside after a terrific victory at the IPL qualifiers, as fans cheer them on. In the video, we can see little Ziva happily running to dad MS Dhoni and hug his legs as soon as he makes his inside. As Dhoni keeps on moving, he signals Ziva to follow him, who then excitedly prances behind him in her cute blue night suit. Sharing the video on the gram, Sakshi wrote, “Super Kings in our hearts and minds! #whistlepodu #chennaisuperkings”.
If you watched the Indian Premier League semifinal between Chennai Super Kings and Delhi Capitals yesterday then we are sure that you must have seen the video of two kids accompanied by who looks like their mother at the cricket stadium stand crying their hearts out following CSK’s victory. Someone must have told MS Dhoni about the two kids crying as after pulling off his last-over, Dhoni went to the stands, signed the match ball, and threw it to the kids who were standing on the balcony above. Both the videos are now going viral on social media, and fans are touched by Dhoni’s sweet gesture.