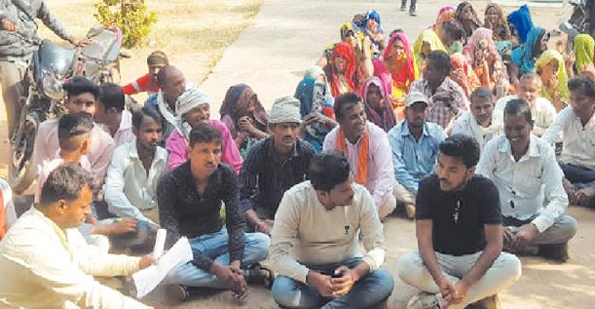 Warn to block road if their problem is not resolved in three days
Angry for not getting ration for 4 months
Chronicle Reporter, Katni
After the Corona period, the government has decided to provide free ration to the families living below the poverty line, so that the poor families do not face problems, but black marketing is also being done by the salesmen on the ration coming in the name of the poor in Katni district of the state.
In fact, on Monday, dozens of villagers of Rohania village of Barwara district, angry over not getting ration for 4 months, sat on a Dharna under the leadership of villager Raghavendra Singh in front of the Barwara tehsil office and shouted slogans against the district administration and food department. Giving information, the beneficiary old woman Dhania Bai has alleged that due to non-availability of ration for the last several months, I and my family are on the verge of starvation, while giving information, villager Raghavendra Singh said that the negligence is being done in the distribution by salesman of Rohania government fair price ration shop. For the last 4 months, instead of distributing ration to about 250 beneficiaries, black marketing has been done. Due to which the poor people living below the poverty line are in a lurch for food. Complaints have been made many times in this regard to the concerned department, but till date it has not been resolved, that is why we all have been forced to protest in front of Tehsil office after getting tired. If the administration does not solve our problem within three days, then there will be a Chakka jam (Road Jam) in Rohaniya village of Barwara Basadi road, for which the administration will be responsible.