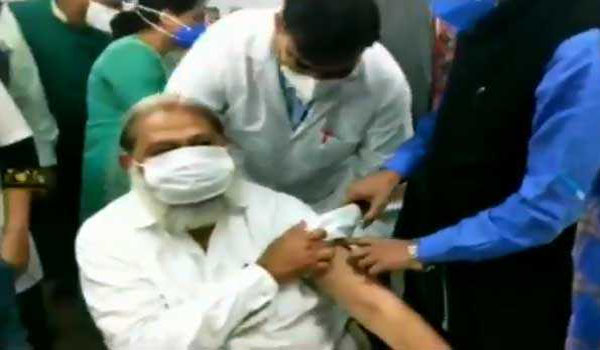 Chandigarh, Nov 20 (UNI) Haryana Health Minister Anil Vij on Friday became the first volunteer for the third phase trial of potential Covaxin vaccine against COVID-19 as he was administered the dose at Civil Hospital, Ambala.

The 67-year-old Bharatiya Janata Party leader had himself volunteered to participate in trials of the vaccine which is being developed jointly by Bharat Biotech and Indian Council of Medical Research (ICMR).

He was administered the vaccine in the presence of a team of doctors from PGI Chandigarh and others.

On Thursday, Mr Vij, also holding the Home portfolio, had tweeted, "I will be administered a trial dose of Coronavirus vaccine #Covaxin a Bharat Biotech product Tomorrow at 11 am at Civil hospital, Ambala Cantt under the expert supervision of a team of doctors from PGI Rohtak and Health Department. I have volunteered to take the trial dose."

The Health Minister has also announced that with him, the third phase trail of Covaxin would begin in Haryana.

The indeginious vaccine is being jointly developed by Bharat Biotech and Indian Council of Medical Research (ICMR).

Bharat Biotech has earlier said the trial of phase I and II of the indeginious vaccine were successful.

The phase-3 trials will involve 26,000 volunteers across India. In Haryana, Pandit Bhagwat Dayal Sharma University of Health Sciences in Rohtak and ESIC hospital in Faridabad have been identified for the trials, the company said.

The pharma major claims that its trials are largest in terms of volunteers in the country.