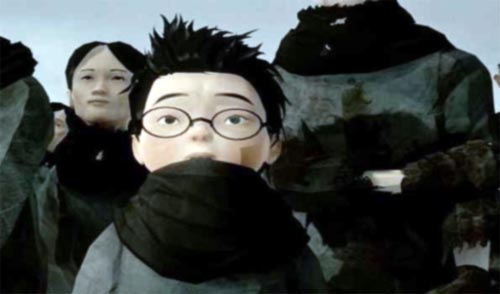 Inspired by testimonies of survivors, the feature-length animated film tells the story of a family held captive in one of the labour camps. Part of the World Focus section of the ongoing 33rd Tokyo International Film Festival, the film is a hard-hitting commentary on the blatant human rights violations in North Korea under a dictatorial regime.

The 93-minute film begins in Vancouver, Canada, in present day where a young immigrant from North Korea, who has escaped from a political prison camp, narrates the poignant story of growing up in a labour camp after the military arrests his family.

The film then travels back to 1995, a year after the death of North Korea's founder Kim Il-sung, the grandfather of present ruler Kim Jong-un. An interpreter is arrested and his wife and two children are taken by the military to a prison camp for political prisoners. The mother dies in the labour camp where prisoners are forced to work in coal mines and fields while the children, a boy and girl, survive. A decade later, the grown-up siblings find a way to escape the camp.

'True North', which had its world premiere at the Annecy International Animated Film Festival -- the world's biggest festival for animation movies in France that had an online edition in June this year -- presents the chilling account of life inside a political prison camp in North Korea.

Made with the support of several North Korean expatriates, the film details the hard labour that people have to endure inside the camp where its inmates are brutally beaten or executed at the whim by security guards. "Everything is decided by a person's thoughts and if he is ideologically motivated, there is nothing he can do," says a quote by Kim Il-sung that appears at the beginning of the film.

An estimated 1,20,000 people are believed to be detained in political prison camps in North Korea though the government denies the existence of such camps and forced labour in the country.

The Tokyo film festival, which began on October 31, runs up to November 9. Marathi road movie 'Karkhanisanchi Waari' (Ashes on a Road Trip) starring Mohan Agashe, Geetanjali Kulkarni and Amey Wagh is the lone Indian film at the festival that has opted for a physical edition this year.