Another day of disruptions in Lok Sabha, two bills passed in din 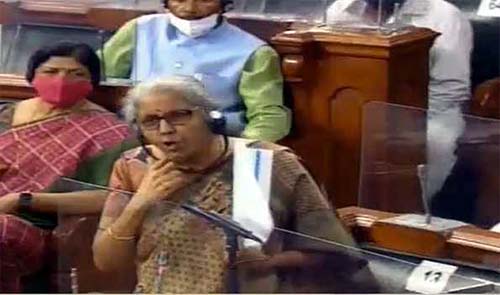 New Delhi, Aug 3 (UNI) The Lok Sabha on Tuesday once again witnessed protests, and was repeatedly adjourned as Opposition members raised slogans on issues like the Pegasus snooping controversy, farm laws, price rise and other issues. The House also passed two Bills in din despite the Opposition's protests.

The Lok Sabha was first adjourned shortly after it met for the day at 11 a.m. amid sloganeering and protests. The scene was no different when the House met again at 12 noon, and the second adjournment followed shortly.

At 2 pm, amid din, the government moved and passed The Essential Defence Services Bill, which aims at preventing the staff of ordnance factories from going on a strike. Around 70,000 people work with the 41 ordnance factories around the country.

Opposition MPs raised an objection stating that the important Bill should not be passed in din.

"This kind of legislation should be passed when the House is in order," he said.

"This is keeping in view national security, so that there is no shortage of arms and ammunition," he said.

The Bill was passed amid din through voice vote later, and the House was adjourned till 4 pm.

When the House met again, protests continued, while Finance Minister Nirmala Sitharaman moved the The Tribunal Reforms Bill, which seeks to withdraw and then replace the Cinematograph Act, the Copyright Act, the Customs Act, the Patents Act, the Airport Authority of India Act, the Trade Marks Act, and the Geographical Indications of Goods (Registration and Protection) Act.

Opposition again objected to passing the Bill without debate, and urged the government to hold a debate on Pegasus snooping controversy.

Opposing the Bill, Chowdhury said, “By riding over the legitimate right of the Opposition, the government has been bulldozing one after another legislation without a discussion… There has been no enlistment of this Bill… by the BAC (business advisory committee).”

However, Chowdhury’s microphone was turned off and the Bill was passed through a voice vote.

The House was then adjourned for the day.

The Monsoon Session of Parliament which started on July 19, has been witnessing a stalemate, with the Opposition protesting over issues like Pegasus snooping controversy, farm laws and price rise.

Opposition leaders have meanwhile said that the government is blocking the proceedings by not agreeing for a debate on the Pegasus issue.