Antibody develops in body in 6 to 12 weeks after vaccination 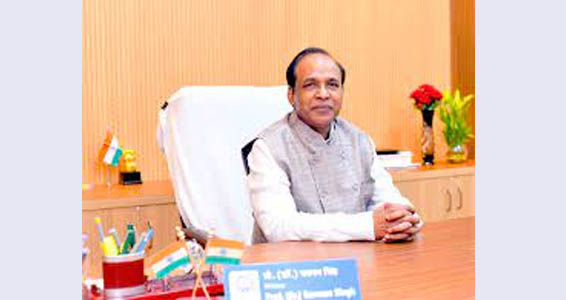 = No death due to vaccination; full impact of vaccine on only 66 percent of people
Sandeep Tiwari
Chronicle Reporter, Bhopal
Covid vaccination is being done at an equally rapid pace amid growing infection of the corona virus across the country and the state. Two doses are being given to people of indigenous vaccines.
According to the new guidelines of the Central Government, till now the second dose of the vaccine was being given after 28 days i.e. four weeks, but now it has been increased to 6 to 8 weeks, after which people are getting confused about how safe is vaccine
Navbharat Newspaper’s team talked to Bhopal AIIMS director Dr. Sarman Singh about these questions of the people.
Question- Why the time of second dose was increased, there is confusion among people about it.
Answer - It has been revealed in the study that after giving both the doses of vaccines, it is taking time for the antibodies to develop in people. Antibody could not be produced in four weeks. Research has revealed that antibodies are being developed completely in 6 to 12 weeks, so the Central Government has extended the time for the second dose of vaccination.
Question- How safe is the beneficiary after getting the first dose of vaccine?
Answer - After the first dose of vaccine is given, its effect is negligible. Antibody begins to form in the body only after the second dose of the vaccine is administered. Therefore, it is very important to get a second dose of the vaccine.
Question- How safe is the beneficiary from Covid who get both the doses?
Answer: Only 66 percent of the people who get vaccinated are fully protected, as has been revealed in all the research. The special thing is that the beneficiaries taking both the vaccine doses are not dying, even after coming positive, they do not have to be admitted to the ICU. Therefore, everyone should get vaccinated.
Question- Some people are suffering from fever and weakness after getting vaccinated.
After getting vaccinated, there are problems like fever, vomiting and body pain. Although it should not happen, but there is no need to panic. Right now, no death or major illness or incident has occurred after vaccination.
Question- People are coming positive even after both the doses are applied.
Answer - It is taking about two months to produce antibodies, so even after applying the two doses of the vaccine, the beneficiaries are coming positive. That is why the time of second dose has been increased now. Maybe now people do not tests Corona positive after both doses. But 100 percent surety is not possible.
Q- What to do to avoid Corona.
Answer - Corona is being out of control. Mask is the best vaccine for all. Everyone needs to maintain social distance. Do not attend marriages. Do not increase crowds in religious programs. Do not go to see cinema, avoid crowded place.