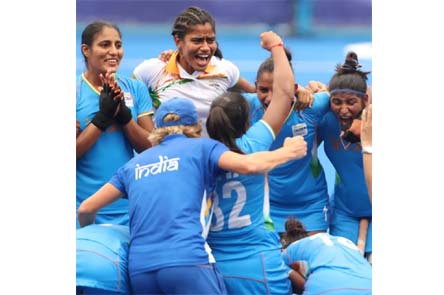 Monday began with a historical win for the Indian Women's Hockey team at the Tokyo Olympics 2020 as they beat the Australian team by 1-0 and advanced to the semi-finals. Giving over a billion Indians a reason to hope, the Indian Women's Hockey Team, led by Rani Rampal, rejoiced on the ground as they advanced to the semis and Bollywood stars joined in the celebration too. Anushka Sharma, Athiya Shetty, Taapsee Pannu, Vicky Kaushal, Neha Dhupia, Preity Zinta, Ishaan Khatter and others took to social media to celebrate India's big win.
Taapsee took to Twitter and lauded the girls. She wrote, "Our chakk de moment never felt more real! Our girls beat Aussies 1-0 and storm into semis !!!! Go for it @imranirampal your girls have our heart!" Vicky Kaushal shared a photo of the celebrating players on the field as he lauded them. Ishaan Khatter also shared a post on his Instagram stories to celebrate Indian Women's Hockey Team's win against Australia. Preity Zinta celebrated the victory of both men and women's Hockey Team in a post.
She wrote, "Congrats to the women & men of #HockeyIndia for reaching the Olympic semifinals. So excited & extremely proud of both our Women & Men’s  teams Here’s wishing them all the very best & hope to see history being written in Blue #Olympics2020  #JaiHind #GoForGold #Tokyo2020." Neha Dhupia wrote, "Yaaaaaasssssss we are in the semis Flag of India the Indian women’s hockey team … what a win!!!!! #ChakDeIndia #IndianHockey @WeAreTeamIndia #OlympicGames #Tokyo2020."
Randeep Hooda also wished the girls and wrote, "What a match .. Super defending .. Real imitates Reel #ChakDeIndia History created by the Indian Women’s #hockeyindia first semi final like ever."
It has been an exciting time for Indian Hockey as even the men's team reached the semi-finals after 49 years. Now, as both the Indian men and women hockey teams have reached the semi-finals of the Tokyo Olympics, the hopes of over a billion Indians are up and many are already cheering for them to win. Apart from this, PV Sindhu won a bronze medal and created history as she became the first Indian female athlete to win 2 Olympic medals. Earlier, Mirabai Chanu brought India a silver medal in weightlifting.