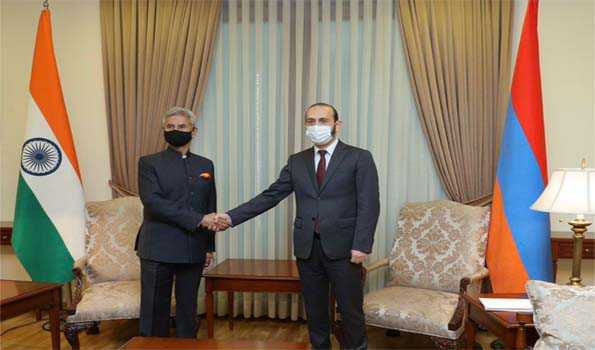 Yerevan (Armenia)/New Delhi, Oct 13 (UNI) External Affairs Minister S Jaishankar, who is on a two-day visit to Armenia, on Wednesday said that Armenia has evinced interest in joining the Chabahar port in Iran being developed by India and both sides have proposed that the port could be included in the International North South Transport Corridor.
In his media remarks after a bilateral meeting with his Armenian counterpart Ararat Mirzoyan, Jaishankar said they also discussed the possibility of starting direct flights between the two countries.
Jaishankar said he had a very fruitful meeting with the Armenian foreign minister with a comprehensive review of the bilateral relations. “We also discussed regional and multilateral issues and most important we agreed on a roadmap for future cooperation. Both agreed that while bilateral relations have expanded there is clearly scope for further strengthening our economic and commercial cooperation, especially in tourism, hospitality, infrastructure sectors,” he said.
He said the lack of land and air connectivity is a hindrance to enhancing people to people contacts and economic and commercial exchanges.
“Both India and Armenia are part of the International North South Transport Corridor which has the potential to bridge the connectivity barrier,” he said, adding that both ministers “discussed the interest that Armenia has shown in utilisation of the Chabahar port in Iran which is being developed by India".
“We’ve also proposed that Chabahar port be included in the INSTC,” he added “We also discussed the possibilities of direct flights between our two countries.”
Armenia is a member of the Eurasia Economic Union and India is currently negotiating a trade agreement with the Eurasia Economic Union “and I am sure it will boost our trade relations”, he added.
He said both had agreed "to encourage the business community, chambers and trade bodies on both sides to engage more and the government will play the role of facilitator”.
He said an Indian business team visited Armenia last month to participate in 30th edition of the Armenian Expo, which was the first visit post Covid. “I am confident there will be more visits which will give further impetus to bilateral trade and commerce”.
He said the relations between the two nations go back several centuries, and there is recorded history of Indian diaspora in the landlocked country in the Caucasus, and that India has a rich Armenian heritage.
Referring to the fighting last year that left thousands killed in the Nagorno-Karabakh region, he said “We recognise that Armenia has gone through a difficult phase last year, and we convey sincere condolences to the Armenian people and those who lost their near and dear ones.”
On the regional security situation in the Caucasus region, he said that India’s position has been very consistent. “Since the beginning of hostilities, we have called for peaceful resolution of the conflict", and supported the bilateral ceasefire agreement.
“India has always been in favour of peace and stability in this region,” he added.
Referring to the large number of Indian students there, he said they are an important bridge in the relations. He said there are almost 3,000 Indian students who are pursuing medical education in Armenia.
“We greatly appreciate the efforts of the government of Armenia and the people for the welfare of the Indian community, in particular the students community. We deeply admire the attachment of the Armenians for Indian culture,” he said and expressed happiness at the prominence given to the statue of Mahatma Gandhi in a central park in Yerevan.
He said their cooperation in the UN and multilateral fora “has been extremely good and we appreciate Armenia’s support for our candidature for non-permanent member of the UNSC and also for permanent membership of the UNSC.”
“I am very hopeful that my visit today has enabled us to further strengthen our cooperation in various fields. We stand ready to support Armenia in the spirit of our close and friendly relations,” he said, and invited his Armenian counterpart to visit India.