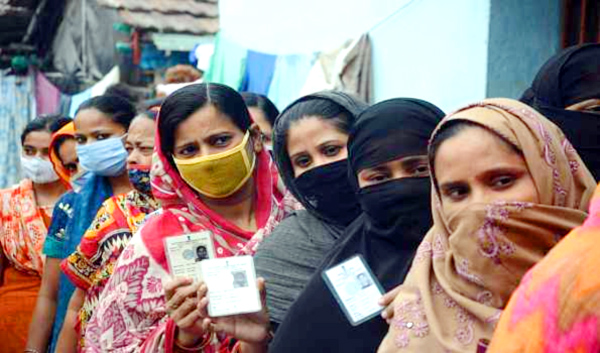 Kolkata, Apr 22 (UNI) Barring some sporadic violence at Bijpur constituency in North 24 Parganas district, the sixth phase polling for 43 seats in West Bengal was peaceful with around 70.42 per cent turnout recorded till 1545 hours.

With polling underway for the sixth phase of West Bengal Assembly elections, Chief Minister Mamata Banerjee stated that she cannot surrender the state to the "two goons of Delhi".

Addresses a public rally in Dakshin Dinajpur district, Ms Banerjee said, "I am not a player, but I know how to play. I was the best player in the Lok Sabha earlier. We cannot surrender our Bengal to two goons of Delhi."

Film director-turned-TMC candidate Raj Chakraborty was gheraoed in Barrackpore constituency by BJP supporters, who accused him of influencing voters. Chakraborty denied the allegations.

Sporadic violence was also reported from Bijpur constituency in North 24 Parganas, where TMC and BJP supporters clashed with each other outside polling booths. Two supporters of the TMC and three of the BJP were reportedly injured in the clashes. A huge contingent of security forces was rushed to the troubled areas to control the situation.

A clash took place between BJP and Trinamool at Lichubagan in Khardah. BJP claimed their camp office was allegedly ransacked at Titagarh by Trinamool around 12 noon.

In the Halisahar area of Naihati constituency in North 24 paraganas, BJP alleged that bombs were hurled at the residence of a local party leader, and that his mother and younger brother suffered injuries. ISF camp vandalised in Naihati,

In Raiganj, sources in the TMC said one of the ruling party activists sustained serious injuries after he was allegedly stabbed by BJP workers.

One BJP and one TMC agent beaten up at Mongolkot in Burdwan district.

A voter at a booth near Nandigram village, Katwa in Purba Bardhaman district was given first aid by the ITBP medic team during the sixth phase of polling.

BJP candidate at Labhpur in Birbhum district attacked during poll campaign on Thursday. Biswajit Mondal the candidate claimed his car was ransacked.

The sixth phase of polls is being held in the midst of an unprecedented Covid-19 surge. West Bengal registered it’s highest-ever single-day spike, with 9,819 people testing positive. A total of 2.95 lakh Covid cases 2,023 deaths were recorded in the country in the last 24 hours.