Article 370 is not sub judice, no power on earth can bring it back: Shahnawaz Hussain 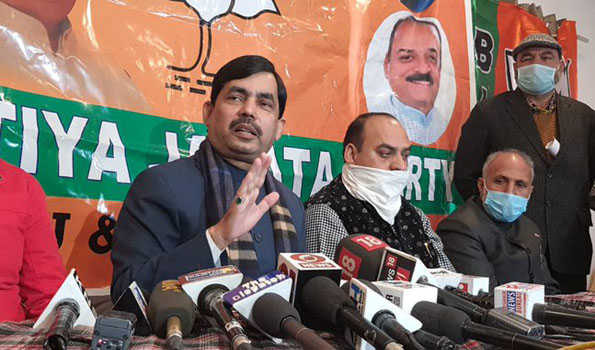 Srinagar, Nov 20 (UNI) Claiming that the matter involving revocation of Article 370 is not sub judice, Bharatiya Janata Party (BJP) National spokesperson Syed Shahnawaz Hussain on Friday said that no power on earth can bring it back.

The BJP spokesperson -- who is in Kashmir valley to campaign for his party candidates, contesting in the upcoming District Development Council (DDC) elections -- said this while addressing a press conference in the summer capital, Srinagar on Friday.

“The matter pertaining to revocation of Article 370 is not sub judice. If someone goes to the court against my press conference, will it be banned? Article 370 will not be restored… no power on earth can bring it back. I want to say this especially to the youth that Article 370 is now buried for good and can never be revived again,” he said while answering a question ‘whether it is to be believed that BJP is commenting on a sub-judice matter because it know that SC will say that same thing’.

He said Article 370 was a big blockade in the development of J&K and now nothing can stop the Union Territory from reaching its true potential.

The senior BJP leader further said that the people of J&K have full faith in Prime Minister Narendra Modi and his ‘Sabka Sath, Sabka Vikas’ mantra.

Hitting out at Peoples Alliance for Gupkar Declaration (PAGD), he said these parties in J&K are representative of nepotism and work for the promotion of their families.

He said the previous regimes in J&K, especially National Conference (NC) and Peoples Democratic Party (PDP), have always thought about their families and relatives without thinking about the common masses. “We (BJP) are against the family rule and never give preference to our families. We do whatever we commit to. In J&K, if you see most of the leaders have a family background as they didn’t allow anyone else to grow. But, we never focus on our families,” he said.

However, he said BJP represents the common man of J&K and works for the poor and the downtrodden. “Development is our only agenda and people will support us for a prosperous J&K,” he added.

“We are concerned about the people of J&K and will ensure the development, which is the right of people and will be given to them. J&K will see a new dawn of development for which the work has already been started,” he said.

He said many projects couldn’t be started in the valley due to the outbreak of COVID-19, but would be started soon.

Alleging that the Congress is scared of BJP, he said the party is still in an alliance with the PAGD behind the curtains. “Congress leaders have had sleepless nights due to PM Modi and Home Minister Amit Shah. It was only after Mr Shah exposed that Congress was a part of the Gupkar gang, they distanced themselves from the alliance,” he said.

“Congress was part of Gupkar alliance secretly and when we exposed them, they claimed that they had nothing to do with it…. Because they (Congress) feel if it remains a part of Gupkar Alliance its name will be changed from ‘Congress I’ to ‘Congress Gupkar’ and they will have to answer the people in rest of the country. Congress has taken a step back in fear of repercussions,” he said.