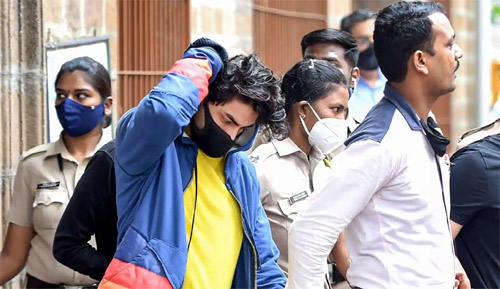 Shah Rukh Khan’s elder son Aryan Khan, who was detained and arrested by the Narcotics Control Bureau after a cruise drug bust, was remanded to NCB custody. On Monday, a court ordered Aryan Khan, Arbaaz Khan Merchant and Munmun Dhamecha to be remanded to NCB custody till 7 October.
During the bail plea hearing, NCB had sought their custody till 11 October for offences under section 8(c), 20(b), 27, 28, 29 of the Narcotic Drugs and Psychotropic Substances (NDPS) Act. Aryan Khan was represented by Advocate Satish Maneshinde, who represented Rhea Chakraborty last year.
As part of the investigation, Aryan’s phone was seized and several chats about drug purchases and transactions have been recovered. The Additional Solicitor General (ASG) argued saying that a lot of incriminating material was found on Aryan’s WhatsApp chats with drug peddlers which also hints at international drug trafficking.
Code names were also reportedly used in the chats. The ASG argued that investigation needs to be conducted about payment methods and the codes used along with probing international transactions. The NCB demanded custodial remand to confront Aryan and the others. The agency sought a 9 day remand.
On the other hand, Satish Maneshinde stated that all sections mentioned are bailable. He read previous judgements as well as Rhea Chakraborty's judgement. He also submitted a Supreme Court judgment to show how the WhatsApp chats cannot be used for incriminating an accused. Maneshinde cited a judgment and pointed out how commercial quantity found with one accused cannot be used for incriminating another accused. "Mere chatting on phone without corroboration does not exist. Hence, further custody is not required," Maneshinde argued.
Maneshinde also read Aryan's statement. A part of it read, "Upon further interrogation, they have downloaded my WhatsApp chats. While I was abroad, they claim that my chats indicate international drug trafficking. The entire period of my stay abroad, I have not been involved in any trafficking, supply or distribution."
After arguments of Maneshinde and other advocates representing Arbaaz Khan Merchant and Munmun Dharmecha, ASG stressed and urged the court to extend the custody. "We are at preliminary stage of investigation. Hence, bail need not be considered now. Please consider extension of time for custody," ASG told court.
The court then asked from whom were the drugs seized. Replying to this, a NCB officer told the court that "small quantity" 6 grams of Charas was recovered from Arbaaz Khan Merchant. Munmun Dhamecha was found with 5 grams of Charas and another accused named Vikrant had 5 grams of MDMA and 10 grams of Cocaine.
The officer added that Ishmeet Singh was also found with 14 MDMA pills. Gomit had 4 pills of MDMA ecstasy in possession and 3 grams of cocaine. Another accused named Nupur had 4 MDMA pills. Jaiswal has no recovery but he provided Nupur with pills. At this point, Maneshinde pointed out there "is nothing on Khan". He said, "Even if their case is, I consumed somewhere else that is not the case here. There are 1000 people on the ship. Investigate them also."