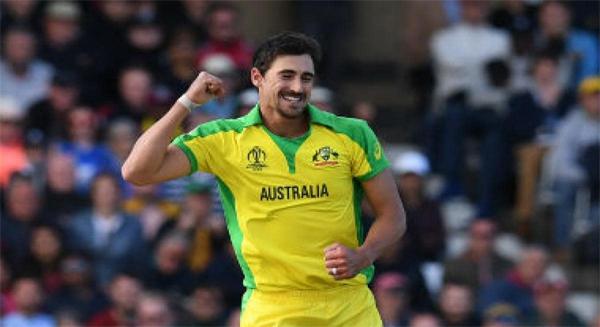 Australia pacer Mitchell Starc on Tuesday said that he is looking forward to the prospect of playing a pink-ball Test during India's next Test tour of the country.
On their last tour in 2018/19, when India secured their first-ever series win on Australian soil,

Virat Kohli led side had declined a proposal to play a day/night Test citing lack of experience with the pink ball.

However, since then, India have featured in their maiden pink-ball Test, against Bangladesh.That match has been part of a recent acceptance of day-night Test cricket by India, and Sourav Ganguly, the president of BCCI, has declared they would like to face Australia under lights.

"A formal announcement will come soon but we have decided to play a day-night test in Australia," Ganguly said in February, before the COVID-19 pandemic hit.

India are scheduled to tour Australia at the end of the year for four Tests. There is no confirmation on the exact fixtures list for the tour, but Starc thinks a Test under lights between the teams would be a great idea.

''I think absolutely a pink ball test in this series against India is a great thing, '' cricket.com.au quoted left-armer Starc as saying.

''The fans love it, it creates a different aspect of the contest. I think bat and ball are a lot closer together. India have obviously played a pink ball Test at home so they’re not completely foreign to it, he added.

“I guess in terms of the advantage if you like, we do have a good record at home with the pink ball. It’s no different to us going to India and they’ve got the advantage there.”

Australia have won all seven day-night Tests they have played and Starc has an excellent record with the pink ball, picking up 42 wickets from seven matches at an average of 19.23 - by far the most among all bowlers.

Australia have played more pink-ball Tests than any other team and Starc admitted their experience gave them an edge, but likened it to any home advantage.
"In terms of the advantage, if you like, we do have a good record at home with the pink ball. That might come into a home-ground advantage and it's no different to us going to India and they've got the advantage there, '' the pacer said.

"It'd be great to have a pink-ball contest in that series and from the little bits I've seen and heard, India are very much open to that as well so that's fantastic," he added.