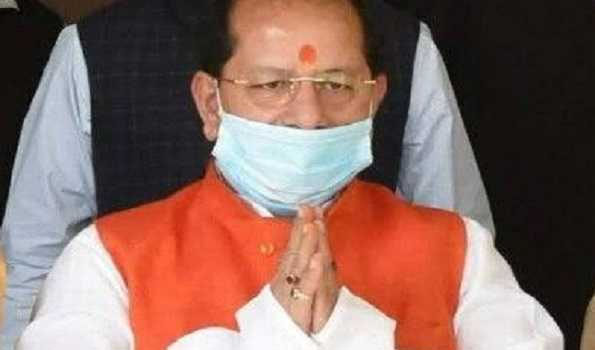 Patna, Nov 25 (UNI) BJP MLA from Lakhisarai and NDA candidate Vijay Sinha was todayelected as speaker of newly constituted 17th Assembly.
Mr Sinha secured 126 votes while Grand Alliance candidate Awadh Bihari Chaudhari got114 votes. Attempt to evolve consensus candidate for the post of Speaker did not succeedas opposition refused to accept the request of the government to allow smooth unanimouselection of a Speaker by supporting ruling NDA candidate.Deputy Chief Minister Tarkishore Prasad and several other leaders of NDA had requestedleader of the opposition Tejasvi Prasad Yadav to follow the tradition of speaker post goingto ruling party When Grand Alliance candidate Awadh Bihari Chaudhari did not withdraw his candidature for the post of the Speaker there was no option but to go for election.

Leader of the opposition demanded from the protem Speaker Jeetan Ram Manjhi to allow secret voting for the election of Speaker but he turned down the request saying there was no such provision.

Mr Manjhi said that Mr Kumar and others who are not members of the House would not participate in the voting. Mr Manjhi accepted the demand of division of votes for election of the Speaker.

Mr Manjhi asked members to stand up who were in support of Mr Vijay Sinha, the ruling NDA candidate for the post of a Speaker. Those who were against his candidature would remain seated, he asked.

Mr Manjhi after counting of members participating in voting announced that Mr Sinha got 126 votes while Mr Chaudhary could secure only 114 votes. He formally declared the election of Mr Sinha as a speaker of Assembly.

Chief Minister Mr Kumar and leader of the opposition Mr Yadav escorted Mr Sinha to the chair of the speaker in the House.

Chief minister Mr Kumar, leader of the opposition Mr Yadav and leaders of all legislative  parties in the house also greeted Mr Sinha on his election as a speaker of the Assembly. Later Speaker adjourned the House for the day.