BJP and Cong veterans on front in by-election 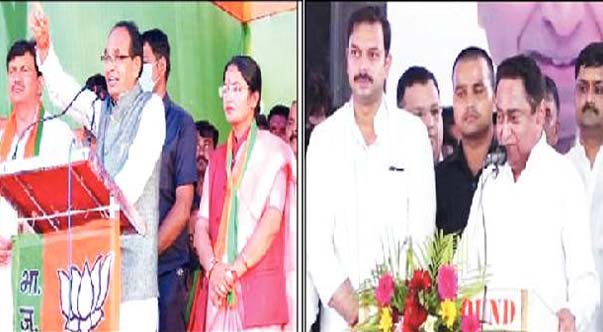 Chronicle Reporter, Bhopal
Madhya Pradesh Chief Minister Shivraj Singh Chouhan addressed an election meeting on Sunday in Simra for the Prithvipur assembly by-election in Niwari district. BJP candidate Shishupal Yadav and state government ministers Gopal Bhargava, Dr. Prabhuram Chaudhary and other public representatives were also present on the occasion.
Pointing to the alleged terror in the region, the Chief Minister said that there is no need to be intimidated. He said that elections are for development and they are the guarantee of development. Appealing to BJP candidate Shishupal Yadav to win from this area, the Chief Minister said that the BJP government has done development work during the last one and a half decades.
Bargi water will reach the fields: Madhya Pradesh Chief Minister Shivraj Singh Chouhan has said that the water of Bargi will reach the fields of Semarwara area of ??Raigaon in Satna district within a year. The Chief Minister held an election rally at Semarwara in Raigaon Assembly Constituency on Sunday.
Those walk with a badge will be accounted for: Nath
In Prithvipur, former Chief Minister Kamal Nath, while warning the administration from the stage, told the public meeting that I want to say one thing that the pressure of the administration will come on you.
Police pressure will come. Don't be afraid, I want to tell the police clearly, remember. After 2, 3 will also come. Those who are taking help of BJP are roaming around with BJP's badge in their pocket. Their full account will be taken. Former CM Kamal Nath attended the Prithvipur public meeting in Niwari. During this, former Chief Minister Kamal Nath said that our Bundelkhand had such big plans. Where did this money go? Can anyone tell where it went? If Congress government comes, we will make a real Lokayukta. Kamal Nath said that the people of Prithvipur are completely with the Congress party.
BJP was eyeing Nitendra: Late Brijendra Rathore led this area for a long time. Brijendra Rathore was my most trusted minister. After his death, his son Nitendra Rathore will serve the people of Prithvipur.