BJP knows how to discharge its responsibilities : Yogi 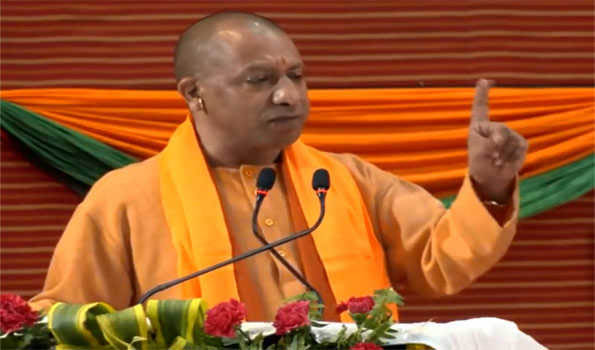 Lucknow, Jan 22 (UNI) Chief Minister Yogi on Sunday said that under the leadership and guidance of Prime Minister Narendra Modi for the first time in Uttar Pradesh a party formed the government again after getting two-third majority and completing a five-year term.

Inaugurating the State Working Committee meeting of the Bharatiya Janata Party (BJP) at Indira Gandhi Pratishthan Chief Minister Yogi Adityanath said in the following two by-elections for Azamgarh and Rampur Lok Sabha constituencies also, BJP won both the seats due to the hard work of party workers. "BJP knows how to function as a winner," he said.

The CM said, "As we gather here today for the State Working Committee meeting, BJP's historic victory in Gujarat for the seventh time inspires us to work with renewed enthusiasm. As a winner, it is again in front of us how we should act while discharging our responsibilities. In May 2022, when we met on the occasion of the State Working Committee meeting, we had the enthusiasm of victory in UP to discharge our responsibilities."

He said people took part in the programmes organised as part of celebrations of Amrit Mahotsav of Independence wholeheartedly. "Perhaps none of us had seen the celebration of 1947, but what does independence mean? Under the leadership of PM Modi, India of 140 crore people unitedly celebrated independence by hoisting tricolor in every house," he said.

Yogi said, "The association of every Indian with the celebration of independence made the festival many times more thrilling. The celebrations reflected the impact of the standards set by PM Modi in eigth years of his governance. India has become the fifth largest economy of the world replacing Britain which ruled it for 200 years and soon it is going to become the fourth largest economy," he said.

He said when the pandemic brought big powers of the world to their knees, India grew as the fastest economy while preserving democratic values. "The world is looking at India with curiosity. Wherever there is a crisis in the world, people look at PM Modi with hope," he said.

The CM said 'Modi Hai to Mumkin Hai' is no longer confined to India and has become a global slogan. "The presidency of G-20 is in front of everyone as an example. PM Modi connected all the citizens with the upcoming G-20 event," he said.

He said in all 11 meetings related to G-20 are to be held in UP's Lucknow, Varanasi, Agra and Gautam Buddha Nagar (Noida). "Under the leadership of PM Modi, G-20 is going to pave the way for global prosperity and public welfare. The summit is an opportunity for showcasing the potential of India to the world," he said.

Yogi said, "It is our good fortune that PM Modi and the Defence Minister represent UP in the Parliament. The potential and limitless possibilities of UP are our achievements. In the Amrit Mahotsav of Independence, the PM had given a pledge to the countrymen to prepare a comprehensive plan of action for the period of Amrit Kaal for a grand celebration of the centenary festival of Independence in the country."

He said the PM had reminded people of Panch Pran, including abolishing slavery altogether, respecting heritage and ending worn out customs. "Monuments of freedom fighters were built and biographies were written. Programmes were held in schools in rural areas and the tricolor was hoisted at every house. Yoga Day on June 21 on the global stage, recognition of Prayagraj Kumbh and Kashi Vishwanath Dham attracts the whole world. The construction of Shri Ram Temple in Ayodhya after 500 years is a respect for the heritage. We are growing by adopting the traditions," he said.

The CM said BJP is the only party for which the interest of the country is first and that of the party comes next while personal interest comes last. He said for BJP, building a developed India and taking everyone along is not merely a slogan, but a reality.

He said, "In 8 years, the country and in a quarter of six years, the state has started the journey, according to the sentiments of its founders and leadership, without deviating from its values, ideals and working on the ‘five vows’ and the picture is in front everyone today," he said.

Yogi said that he got an opportunity to serve as a Member of Parliament from Gorakhpur since 1998. "In 1999, death due to meningitis came to light in and around Gorakhpur and it was found that the disease had spread in 38 districts. Around 50,000 children have died of meningitis in the last 40 years," he said.

He said, "Japan developed the vaccine for meningitis in 1905, but it took 100 years for the vaccine to arrive in India. Those who ruled for 55 years did not see the plight of those children of UP, because the poor, farmers, laborers, youths and the innocent were not on their agenda. They only had caste and religion on their agenda. 90 percent of the deaths due to encephalitis were from minority and scheduled societies."

The CM said in 2004 during Atal Bihari Vajpayee's government, efforts were made to get the vaccine. "When the first batch arrived in 2005, vaccination started. After the formation of the BJP government, under the guidance of PM Modi, the state is moving towards one district, one medical college and has successfully controlled 95 percent of deaths due to encephalitis," he said.

He said during the coronavirus pandemic, under the leadership of PM Modi, India developed two vaccines in 9 months and gave free doses of 220 crore vaccines. "Many countries were also given free vaccines. Most of the deaths due to Spanish flu occurred in India. People also died of hunger. During Corona, 80 crore people in the country and 15 crore people in UP were getting double dose of free ration," he said.

Yogi said in eigth years, under the leadership of PM Modi, not a single plan was made keeping in mind the individual, caste, region, language, but adopting the mantra of Pandit Deendayal Upadhyay, looking at each and every section of the society. "Jan Dhan accounts were opened for every poor person across the society. The benefits of the schemes of the central and the state governments related to farmers were given to each section without any discrimination," he said.

The CM said due to the model of security and good governance, the world's biggest investors want to come to UP. "As a result of investment in the last 5 years, 1.61 crore youth were linked with jobs and employment. Traditional industries were encouraged by branding them as ODOP. As a result, employment and jobs were created and exports increased," he said.

He said, "Earlier people used to call UP a sick state, today it exports products worth Rs 1.60 crore from traditional industries. UP has become an export state. UP is an agricultural state. We have the most fertile land. It is the soul and heart of the country. It’s the land of Lord Ram and Lord Krishna. Baba Vishwanath Dham is here. Naimisharanya, the land of recording Vedic knowledge in UP and confluence of Mother Ganga-Yamuna-Saraswati, Bhagwat are in UP. Traditions related to Shakti Peethas are also in UP. Those who did not understand this power, used to ban the Kanwar Yatra."

Yogi said an Indian must feel proud of his heritage. "Most of you must have been young during the Ram Mandir movement, but you dedicated yourselves to this movement. There was no desire of becoming MP, MLA, Minister, or CM, but to be a winner in the pursuit of Ram temple. And today, we stand victorious. We didn't take the escape route. It was no physical strength, but a spiritual one derived from the resolve to fight for the motherland and Lord Ram," he said.