BJP leaders meet over UP candidates, first list to come out soon 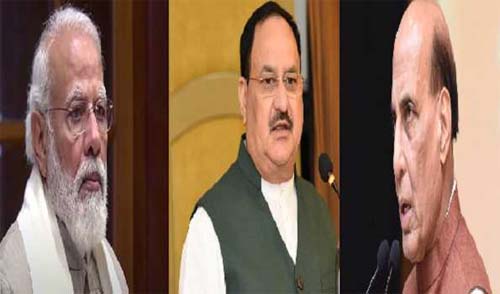 New Delhi, Jan 13 (UNI) The Bharatiya Janata Party (BJP) on Thursday expressed confidence over winning Uttar Pradesh, outshining its own performance in the last polls, even as a series of resignations by sitting MLAs in the state hit the party.

The Central Election Committee of BJP met on Thursday and discussions were held on seats which would go to polls in the early phases. Prime Minister Narendra Modi, BJP president JP Nadda, and Union Ministers Rajnath Singh and Nitin Gadkari were among the leaders who joined the meeting virtually.

Home Minister Amit Shah and Uttar Pradesh Chief Minister Yogi Adityanath were among the leaders who were present at the party headquarters for the meeting, along with several other top leaders.

Uttar Pradesh Deputy Chief Minister Keshav Prasad Maurya, in a brief statement to the media after the meeting, said "Discussions were held on 172 assembly seats. This time, we will register a bigger victory than 2017."

The meeting was however overshadowed by a series of resignations of party MLAs in UP, which started with the resignation of Swami Prasad Maurya, who was a minister in the Yogi Adityanath cabinet.

Marathon meetings on Uttar Pradesh polls have been going on in the BJP headquarters here since Tuesday. Party leaders discussed poll strategy, and challenges of campaigning with covid protocols among other things.

Sources said the first list of candidates will be out soon.

The BJP is likely to drop several sitting MLAs as the first list is awaited. The party is also considering fielding Adityanath as a candidate from Aydhya in the polls. A five time Lok Sabha MP, he is presently a member of the legislative council in the state.

Apart from this, Deputy CMs Maurya and Dinesh Sharma are also likely to fight polls. While Maurya may fight polls from Sirathu of Kaushambi and Sharma may fight from a seat in Lucknow.