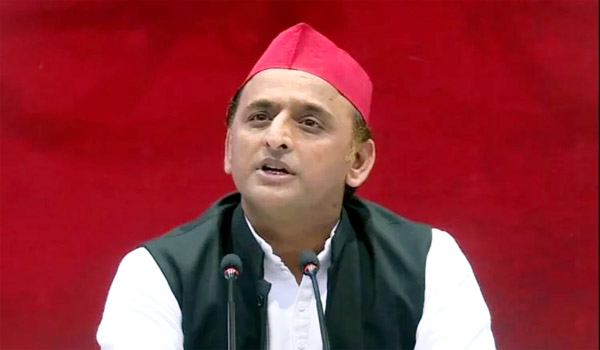 Lucknow, Jun 19(UNI) Samajwadi Party president and former chief minister Akhilesh Yadav has charged that the BJP is shocked by its defeat in the Panchayat elections and was now misusing government machinery for winning the district panchayat chairman  elections.
Despite not having the strength of numbers, the BJP leadership, anxious to make it its chairman, is forcing the panchayat members to vote in their favour by intimidating them, putting pressure through the government machinery.
He said that this is a gross misuse of power and democracy is in danger due to these repressive policies of the BJP government.
There are 3,050 district panchayat members in the state who will elect chairman in 75 districts .
SP chief Akhilesh Yadav said in a written statement here on Saturday that in the districts of Auraiya, Mainpuri, Firozabad, Etah, Hapur, Siddharthnagar, Rampur, Gorakhpur, Farrukhabad and other districts, the ruling party openly harassing the elected district panchayat members of Samajwadi Party and its supporting parties.
"The extent is that the family members of Panchayat members are also being harassed in different ways by the government machinery. Samajwadi Party delegation had also complained to the Director General of Police in the past, but the result is yet to come," Mr Yadav said.
Mr Yadav made serious allegations against BJP MLAs, leaders and ministers saying that the BJP MLA from Khajni is charged of kidnapping the son of a Kshetra Panchayat member in Gorakhpur. Here the daughter-in-law of the BJP MLA is contesting the election of the block chief.
Similarly in Rampur, the opposition district panchayat members were being harassed by the police at the behest of the ruling party leaders.
"Sometimes our district panchyat members were harassed in pretext of vehicle and electricity checking. Husbands of Zilla Panchayat members are also being harassed," he said.
Mr Yadav said that if the BJP government wants to make its district panchayat chairman with money power by pressurizing the district panchayat members on the basis of its administration and police, then it will have to face huge public outrage in the coming 2022 Assembly polls.
"People have decided to throw BJP out of power in the elections to be held in the year 2022. This time the people will support Samajwadi Party will form the government in the state," he claimed.