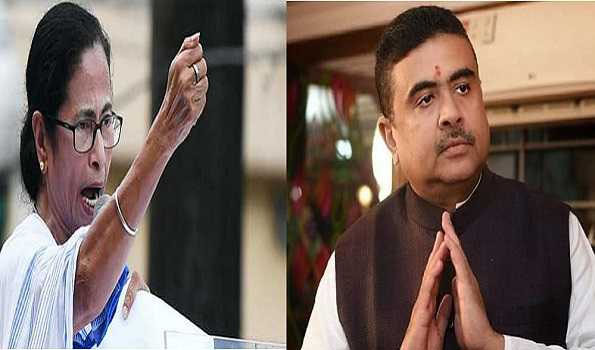 Kolkata, (UNI) BJP on Saturday nominated Suvendu Adhikari to contest against West Bengal chief minister Mamata Banerjee from Nandigram assembly seat, a constituency among ll the 294 is in the headlines since the TMC supremo chose to contest from East Medinipur and its former MLA Suvendu dared her to face the electorate.

BJP's central leadership announced a list of 57 candidates for the two phase polls on March 27 ( 30 seats) and April 1 ( 30 seats) and put the former TMC MLA Suvendu Adhjikari to fight against his political boss.

The BJP's list was out in New Delhi, a day after Ms Banerjee announced her candidature for the Nandigram seat and she said she would fight only from that constituency.

Mr Adhikari has welcomed Ms Banerjee's decision and said they would meet again in the ensuing poll battle and see who comes out the winner.

In the history of elections in West Bengal traditionally Kolkata and its surrounding had been the key constituencies where voters across the state would glue their eyes for the results.

But this time Nandigram hogged the limelight since Ms Banerjee in January announced her wish to contest the election from the place where peasant movement in 2007 finally led to the powerhouse of West Bengal in 2011 assembly poll.

Election to Nandigram to he held on April 1. BJP sources said Prime Minister Narendra Modi is scheduled to address a party rally at Brigade Parade Ground tomorrow and insisted that the first two lists of candidates should be released before his going to Kolkata. Besides the PM, Home Minister Amit Shah, Defence Minister Rajnath Singh and Union Minister Nitin Gadkari were also part of the BJP election committee meeting of the day in New Delhi..