BJP to form govt with absolute majority in Bengal: Nadda 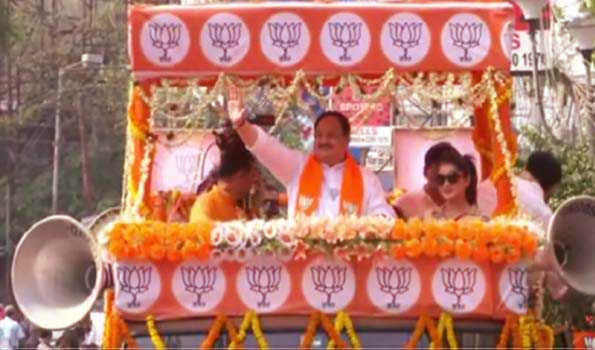 Kolkata, Apr 5 (UNI) Bharatiya Janata Party (BJP) National President JP Nadda on Monday said the party will form the government with an absolute majority in West Bengal.
Addressing a roadshow here, Mr Nadda said, "The signals in the two phases of West Bengal have clearly shown that BJP is heading towards victory."
He said the people of Bengal have made up their mind for change.The BJP president said Babul Supriyo will win from Tollygunge and the lotus bloom is certain in Bengal.
Mr Nadda holds a roadshow from Tollygunge Tram Depot to Garia More in the city today in favour of Tollygunge BJP candidate Babul Supriyo and Behla East candidate Payal Sarkar.
There is a huge crowd of people on the roadshow. Thousands of people who joined it were seen shouting slogans like Jai Shri Ram, Vande Mataram, Bharat Mata Ki Jai, Narendra Modi Zindabad, Amit Shah Zindabad JP Nadda Zindabad etc.
Mr Nadda riding a jeep with an open hood shows the symbol of victory with the candidates. To see them around, people from both the streets and on the roofs have gathered.
Mr Nadda is throwing flowers on his workers and flowers are being showered on them from the surrounding buildings.
The Tollygunge constituency is set to witness a tough fight as BJP has fielded Union minister and party MP Babul Supriyo from the seat.
Veteran actress and Samajwadi Party (SP) MP Jaya Bachchan will campaign for ruling Trinamool Congress (TMC) candidate from Tollygunge Arup Biswas.
Ms Bachchan is likely to use her Bengal connection to bolster the TMC’s election campaign and the party’s main poll slogan ‘Bangla Nijer Meyekei Chay’ (Bengal wants its own daughter).
Meanwhile, in a tweet, Mr Suoriyo said, “I welcome her (Samajwadi Party MP Jaya Bachchan) in West Bengal. I won't talk about family relations with her but she knows me very well. She will speak against BJP but she will never say anything against me.”