BJP veterans gauging their strength by gathering crowd in banquets 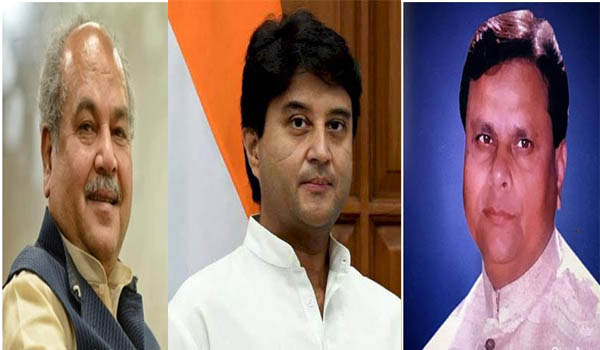 Harish Dubey, Gwalior
There are still two years left for the MP assembly elections. The election of the local body cannot be said completely yet, but the political atmosphere of Gwalior-Chambal has been more enthusiastic than the last few weeks. It started with a banquet given to the workers at Bandhan Vatika by Union Minister Jyotiraditya Scindia, who joined the BJP along with his camp from the Congress. On the third day, Union Minister Narendra Singh Tomar also kept a similar banquet for the workers and his supporters in his home area, Murar. Now Jaibhan Singh Pawaiyya, a former minister in BJP, who maintains distance with both Scindia and Narendra Singh in local politics, has also warmed up the local politics by organizing a big aarti and banquet on the second day of Dussehra.
Different implications of this banquet politics of veteran BJP leaders are being understood. Jyotiraditya Scindia is not letting go of any chance to mingle in the BJP organization. They have not only visited veteran leaders like Pawaiyya, Narottam Mishra, MP Vivek Shejwalkar, former governor Prof Kaptan Singh Solanki, but also visited the party's district headquarters Mukherjee Bhawan to meet the BJP's divisional organization secretary. When Scindia gave the workers' banquet, even in this event, he was seen meeting the old BJP workers and leaders more than the newcomers who left the Congress with him. Not only did he inquired about the well being of established leaders like Jaisingh Kushwaha and Vedprakash Sharma, he also met the ward level workers of BJP with the same intimacy. The workers were also surprised when Scindia, who had come from Delhi to celebrate Dussehra, took out his fanatical supporters like Mohan Singh Rathod and Ramvaran Singh from his car outside the airport and made Rakesh Jadaun, a follower of Narendra Singh Tomar, sit in the car and talked with him in private.
The workers' banquet hosted by Union Minister Narendra Singh Tomar in suburban Murar was publicized by saying that Narendra Singh had not met many of his old friends and classmates due to his long engagements. Therefore, on the pretext of a banquet, the workers organized a meeting with him. By the way, supporters of Narendra Singh say that supporters like Sonu Mangal, Devesh Sharma had already decided the outline of this event before Scindia's banquet and it is a coincidence that there was a difference of only two days between the dates of these two workers' banquet. The truth is that Narendra Singh, who became MP for the second time from Morena, wants to maintain his association with Gwalior.


Pawaiyya performed Maha Aarti as he returned from Mumbai
The workers banquet of Jaibhan Singh Pawaiyya has also given rise to many discussions, speculations in the politics of Gwalior-Chambal. There is no doubt that Pawaiyya was never close to Scindia and Narendra Singh. He is in political background since he lost the last assembly election and the party has sent him as co-incharge of Maharashtra BJP organization. But to keep himself fresh for future politics, he is active in Gwalior BJP. Generally Pawaiyya performs Govardhan Puja every year after Diwali with grandeur at their home. But this time, as soon as he returned from Mumbai, on the second day of Dussehra, he organized events like Maha Aarti and Bhoj in the Gwalior Mela complex. The special thing is that this week three big BJP leaders hosted a banquet in Gwalior, but these three leaders did not attend each other's event. Scindia's special warlords, former MLAs Ramesh Aggarwal and Devendra Tomar were definitely seen in the event of Pawaiyya.

Version
These three banquets had different apolitical reasons; it should not be seen through a political lens. Scindia's purpose was to introduce and meet all the workers, while Narendra Singh also wanted to meet his old colleagues, workers, while Pawaiyya had kept the Maha Aarti, we do have prasad distribution after the Aarti.
Kamal Makhijani, District President, Gwalior BJP