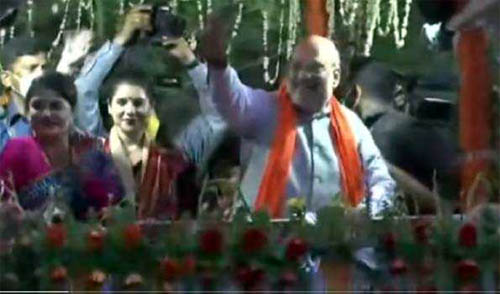 Howrah, Apr 7 (UNI) Union Home Minister Amit Shah on Wednesday held roadshows across Bengal and reiterated that the BJP will win over 200 seats in state.
Addressing a roadshow at Domjur, Mr Shah said, on May 2, BJP will form government with over 200 seats.
He said Mamata Banerjee's frustration can be seen in her speeches and behavior.
“I visited only one gram panchayat but with the enthusiasm I saw, I’m confident that Rajib Banerjee will win with majority,” the union minister said.
The situation is very good. People of Bengal are ready for change. We will win more than 200 seats. It will be bigger than the 2017 Uttar Pradesh win.
“I have been saying since 2017 that BJP will do well in Bengal. In 2019, I said we will win 21 seats. I am quite clear that the people of West Bengal have faith in the leadership of Prime Minister Narendra Modi.
Meanwhile, Mr Shah has lunch at the residence of a rickshaw puller who is also a BJP supporter. Party's Domjur candidate Rajib Banerjee is also present.
Union Home Minister held a colourful roadshow at Singur in Hooghly district today and promised rapid industrialisation of the area if BJP is voted to power.
Cheered by crowds, Shah stood atop a decorated vehicle with BJP candidate for the Singur seat Rabindranath Bhattacharya, who recently joined the saffron party after leaving the Trinamool Congress, and smilingly waved at people standing by the roadside and on terraces and balconies.