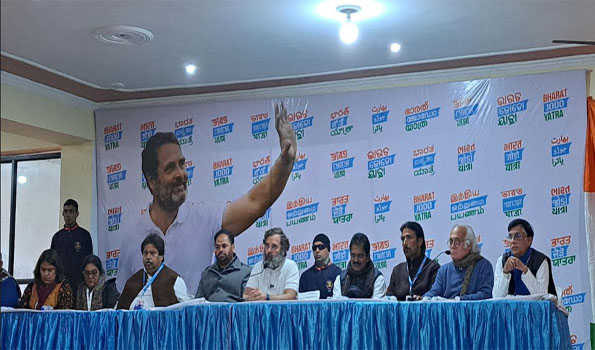 Jammu, Jan 24 (UNI) Stating that the Congress party is opening "shops of love" Congress leader Rahul Gandhi on Tuesday said that the Bharat Jodo Yatra has largely succeeded in fighting the "narrative of hatred being spread across the country."

"The yatra has largely succeeded in fighting against the narrative of hatred being spread across the country," said Rahul Gandhi addressing a press conference here at Jhajjar Kotli in the city outskirts en route Udhampur.

Gandhi will reach Ramban this evening and the Bharat Jodo Yatra will march towards Banihal on Wednesday on way to Kashmir.

The Yatra has brought the people together, said Rahul adding, "lot many lessons are learnt and many experiences are gained through yatra as people from different shades got connected."

"We are spreading a message of love and for Congress party there is no scope of hatred in the country," said Rahul Gandhi.

He further added that the Jammu and Kashmir has been made a scapegoat of politics but Congress party is opening "shops of love" across and uniting people.

"Bharat Jodo Yatra is to connect, unite and end the seeds of hatred being sowed by BJP, RSS in the country," he added.

He said there was not even a tinge of hatred for anybody including Prime Minister Narendera Modi.

“I am not scared of anybody, so why should I have hatred for anyone,” he said.

On Jammu and Kashmir, Rahul Gandhi said that Congress stand on restoration of statehood and holding Assembly elections is very clear.

"We will put all force to restore statehood in J&K and also reiterate that Assembly elections be held at the earliest," he said.

Asked if BJY was apolitical, why he was continuously targeting BJP, Rahul said that since Congress is the grand old political party, there will surely be a bit of politics in his speeches during the Yatra.

“When Kashmiri Pandits, farmers and unemployed youth meet me during the Yatra with a hope that I will definitely rake up their issues and if I do not highlight them, there would obviously be a problem," the Congress leader said.

On a question that Dogra Swabhiman Sanghthan Party leader Choudhary Lal Singh was not invited at the stage to join him at Lakhanpur when yatra entered the Jammu and Kashmir, he replied, "Lal Singh supported Yatra and Congress appreciates it. As far as Ghulam Nabi Azad is concerned, 90 percent of his supporters and party men were on our stage. I would like to tender my apology if we have hurt Azad or Lal Singh."

However, on Congress leader Digvijay Singh's remarks on surgical strikes against Pakistan, Rahul Gandhi said, "I disagree with him (Digvijay Singh). Noone can question the Army or ask for proof. We respect our Army and we have full faith in it. Digvijay Singh’s views are personal."

On reports that crores are being spent for his Bharat Jodo Yatra, he said, "BJP and RSS spent thousands of crores to tarnish my image, yet didn’t succeed. I want to tell BJP that money cannot hide truth because truth has a nasty habit of coming out."

He also said that youth in Jammu and Kashmir are suffering from depression and discomfort and Bharat Jodo Yatra is here to share their pain and listen to them.