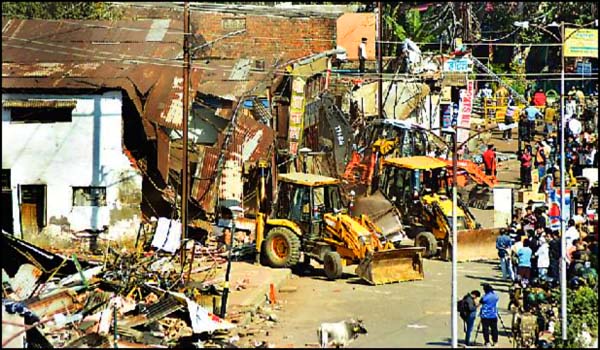 Chronicle Reporter, Bhopal, The district administration and the Bhopal Municipal Corporation (BMC) team along with the police force removed the encroachments of the Irani Dera on the platform number 6 side of Bhopal railway station on Saturday.

JCB machines razed illegal encroachments and constructions spread over about 12 thousand square meter area. However the shopkeepers here removed their belongings on their own.The shopkeepers themselves reached their shops early in the morning and took all the items kept in the shops with them. Protests started from inside the camp. People shouted slogans on the occasion. A large police force was deployed during the encroachment removal.

The entire land is said to be in the name of Lalji Bhai Thakur, who has passed away, after which a case is pending in the court. Encroachers have alleged that how the authorities acted here even though this land is private. Encroachment of about 40 shops had been removed. While the encroachers have said the land is private, sources revealed that in 2017 the court had ruled the land belongs to the government. More than 200 personnel of Rapid Action Force had been deployed.

Over 200 families reside in the Irani Dera. The police had advised the local people about the action in the night itself. The district administration and the municipal corporation staff was deployed on the occasion. Power of the entire area had been snapped. All three routes to reach Irani Dera were sealed.

The authorities pulled down only the shops and the house owners were given two months’ time to voluntarily vacate their houses and shift their belongings.

A few days ago, the district administration and the municipal corporation had talked about taking action on encroachment on the Iranian camp of the capital, but due to some reasons, this action could not be taken. After years, the administration has been able to muster the courage to act here. A few days ago, a police party was attacked in Irani Dera in Aman Colony in Karond area. Sagar police had reached to arrest three accused in a case of cheating. During that time stones were thrown at cops.

Metro station work has to begin

The action was taken under the supervision of ADM Dilip Yadav. The ADM said the encroachments were removed from the commercial area. He said the metro station is proposed here. The work on metro station would begin after removing the encroachments. The residents said the administration is taking action out of vengeance and that they would approach the court in this regard.

According to the information, the Hussaini Janakalyan Samiti has illegally occupied about 12000 square meter of government land on 80 feet wide Hamidia parallel road.

Questions have been raised on the action taken against shops outside the Irani Dera. The question is why the houses of the Dera were not removed. Why were the shops built only outside it removed? However, the shopkeepers say that they were running shops on rent for more than 30 years.

The residential area is surrounded by a boundary wall on all four sides, while shops outside this boundary wall were built. The shops were rented, while some were run by the dera people. According to the administration, the Hussaini Janakalyan Samiti claims the land belongs to it.

The case went to court between the government and the Hussaini Janakalyan Samiti. In the year 2017, the administration won the case and the land was declared official, but even then no action was taken. Recently, the police were attacked during the action at Irani Dera located in Aman Colony, Bhopal. After this, the old files were opened again.

However, this action was postponed thrice in 10 days. Finally, action was initiated against the encroachment on Saturday morning. The administration team reached the spot on Friday evening, when it was being said that the residential area would be removed, but the administration took action only against the shops and demolished them. In such a situation, the question arises once again why action was not taken in the residential area of ??the Irani Dera that has been declared illegal.

egarding action on Irani Dera, Minister Vishwas Sarang said that there will be no compromise on law and order in Madhya Pradesh. Action will be taken against those who occupy government land. Congress leaders continued to patronize land mafias. PC Sharma has given protection to such goons and miscreants. Action is being taken against the corruption prevailing in the Congress government, Sarang said.

However, Congress leader PC Sharma has hit back at the BJP. He said the action on the Irani Dera has been done in retaliation. The former minister said that this action was wrong. He said that the government is engaged in making people unemployed by ending their livelihood. If people lose employment, they will go towards criminal activity.

Sharma said the government is not able to provide employment to the poor, who are earning a family by earning daily. Their hard work is also not being appreciated by this government. The BJP was in power for 15 years. So the BJP’s charge against Congress is baseless.