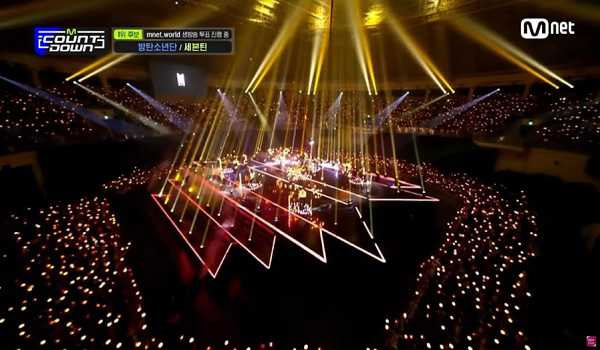 The Korean boyband unveiled the comeback stages of 'Yet To Come (The Most Beautiful Moment)' and 'For Youth' from their new album 'Proof' that was released on June 10.

The highpoint of the event was the stage that showef the ARMY-BTS bonding and the start of the program with 'Young Forever' sung directly by 4,000 ARMYs who filled the auditorium.

BTS, who appeared on the lift with cheers, presented 'For Youth', which was completed with blue point styling in a refreshing mood, naver reported.

BTS continued the stage by making the audience members enjoy every moment of their performance.

In 'Yet To Come', which opened with SUGA on the piano, showed BTS in a black and semi-formal look.

The members presented a perfect stage as always with yellow glow bulbs and the pollen scattered heightening the mood.

BTS finished with 'Ending Fairy' with 7 people and 7 colors, delivering joy to their viewers.

BTS deep impression and ethereal looks by along with 4,000 fans responding with 'Army Bomb', made the stage richer.

BTS also took first place on 'M Countdown' at the same time as their comeback.

BTS will perform a new song on stage on Friday at the KBS2 'Music Bank' and again on Sunday at the SBS 'Inkigayo'.