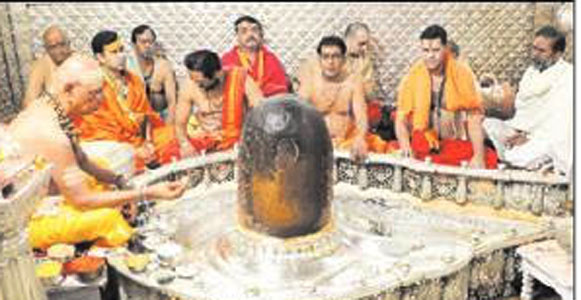 Ujjain/ Bhopal-Celebration of Shivnavratri festival in Mahakal Temple Jyotirlinga has been started from Wednesday. Lord Mahakal became a groom. Nine days till Mahashivaratri, God will have an attractive makeup in nine forms. The time of bhog aarti and evening worship will also change in Shivnavratri.
According to the tradition of the temple, Shivnavratri will begin with the worship of Shivpanchami in the Sri Koteshwar Mahadev temple near Kotitirtha Kund. At 8 o'clock in the morning, the priest offered turmeric after performing anointing and worshiping Shri Koteshwar Mahadev. After about an hour of worship, Lord Mahakal worshiped in the sanctum sanctorum from 9.30 am. The priest performed the worship of Lord Mahaka by performing Panchamrit Abhishek. After this, Ekadash-Ekadashini Rudrapath was done by 11 Brahmins. After this, Bhog Aarti was held at 1 pm. After the evening worship of Lord Mahakal at 3 in the afternoon, makeup was done. This sequence of worship will last for nine days till Mahashivaratri. 11 Brahmins and 2 assistant priests who perform Ekadash-Ekadashini Rudrapath for 9 days will be presented one Sola and Dakshina as per tradition by the temple committee on the first day of Shivnavratri.
On the first day of Shivnavratri, on Wednesday, Lord Mahakal's Chandan Shringar was done on the second day of Shivnavratri, Sheshnag on the third day, Chabina on the fourth day, Holkar on the fifth day, Manmahesh on the sixth day, Uma-Mahesh on the seventh day and Shivaandava on the eighth day. On Mahashivaratri, the Lord will be decorated in the form of Saptadhan and a Sehra made of one and a half hearts and flowers on his head