Bang Baang – The Sound of Crimes- new poster out now 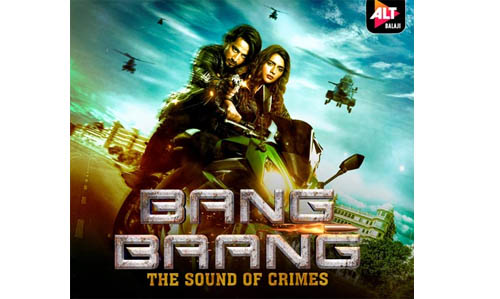 Treating fans with posters, teaser and trailer, ALTBalaji and ZEE5 have recently shared a new sign of their highly-anticipated youth-thriller franchise, 'Bang Baang - The Sound of Crimes' showing the chemistry between the two popular actors - Mr Faisu and Ruhi Singh.

The new poster with interesting, colourful shades features Faisu and Ruhi Singh in two different situations - as they are on the run on their high-end bike and the other where they look determined to do all that it takes to complete their mission by holding a gun in their hand, James Bond-style!

Bang Baang is set to be a visual spectacle for youth-led masala action cinema lovers and will leave the viewers glued to their seats. The original web-series involves mystery, suspense, dhamakedaar action, and youth drama amidst deep-lying secrets that unravel one by one. The new action teaser launched recently has undoubtedly left the audience, especially action lovers asking for more.

Popularly known as Mr. Faisu, the social media star had one of the highest followers on TikTok, as he created content on the video-sharing application that gained his massive fame. Today, he has fans across the internet who are rooting for the success of his first web-series.

The female lead, Actress-model and former Miss India, Ruhi has featured in films including Calendar Girls and Ishq Forever and web series like Spotlight 2, Run Away Bride, and Anti Social Network. The talented actress who enjoys a massive fan following across social media is also trained in martial art and Shaolin Kung Fu, making her an apt choice for the action-packed show.

Produced by Akshay BP Singh and directed by Abhishek Kapur, Bang Baang will be streaming from January 25th on ALTBalaji and ZEE5.