Bangladesh Army to remain ready to face any threat from home or abroad: Sheikh Hasina 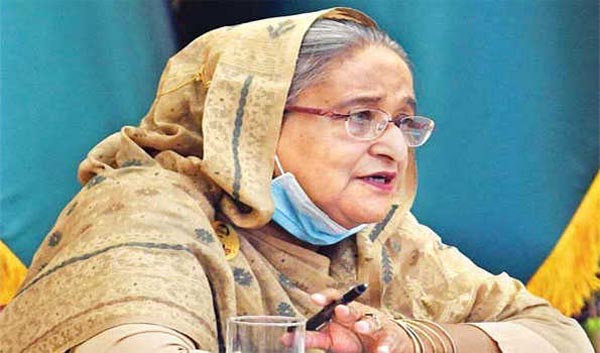 Dhaka, Oct 28 (UNI) Bangladesh Prime Minister Sheikh Hasina on Wednesday called upon the Bangladesh Army to remain ready to face any threat from home and abroad to maintain the unity of the Holy Constitution and the sovereignty of the motherland.
"You have to be ready to face any threat inside and outside the country while maintaining unity in safeguarding the sacred constitution and the sovereignty of the motherland," he said.
The Prime Minister said this while addressing the flag hoisting ceremony of eight units and organizations of the Bangladesh Army. He virtually attended the function held at Sheikh Hasina Cantonment in Lebukhali, Patuakhali from his official residence Ganobhaban.
The Prime Minister said the Bangladesh Army is a symbol of confidence and trust of the people of the country and they have to move forward by gaining the confidence of the people.
He noted that the first requirement of Army members as members of the Bangladesh Army is professionalism and training.
"And to achieve this desired standard of professionalism, you all need to be professionally proficient, attracted to religious and social values ??and maintain an honest and prosperous life," he said.
The Prime Minister hoped that the members of the Army would work diligently to fulfill the responsibilities entrusted to them while maintaining the core driving force of the Army including trust in the top leadership, mutual trust, compassion, brotherhood, duty, sense of duty and above all maintaining discipline.
He said the government wants the members of the armed forces to fulfill their responsibilities to the motherland, the country and the people.
Reiterating the foreign policy of Bangabandhu Sheikh Mujibur Rahman, he said, "Bangladesh does not want war with anyone, but friendship with everyone."
"We want to make Bangladesh socio-economically prosperous with this friendly relationship," he said.
However, he asserted that if there was an attack on Bangladesh at any time, the government would be prepared to deal with it.
"We want to be ready, we want peace and friendship, we don't want enmity and war, because we have already witnessed the devastation of war, we are victims of war, we don't want to get involved in such conflicts again," he said.
He said Bangladesh wants to move towards prosperity peacefully.
Sheikh Hasina said the country's economic development and prosperity is the main goal of the government and they are working relentlessly towards that goal.
The Prime Minister said the government has taken all necessary steps to develop the Bangladesh Army capable of meeting the geopolitical and military challenges of the 21st century.
In this case, he mentioned that "the government is implementing 'Force Goal 2030' following the defense policy of the father of the nation."
He lauded the dedication and responsibility of the members of the Army in dealing with various natural calamities and humanitarian crises and asked them to continue such efforts in the days to come.
The Prime Minister also lauded the role of the Army in combating the Covid-19 epidemic and said that the members of the Army were appreciated for creating public awareness about the coronavirus.