Bangladesh has banned Iftar gatherings during Ramzan amid Corona threat 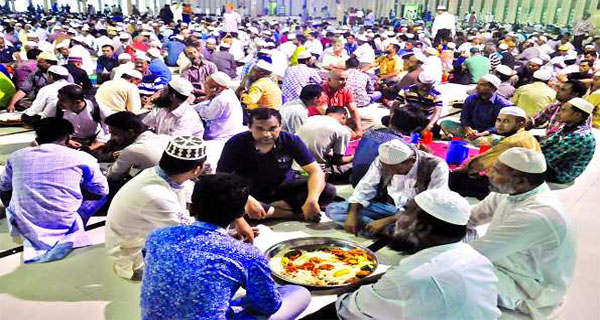 Dhaka, (UNI) Bangladesh has banned Iftar gatherings during Ramzan in an effort to limit the spread of the Coronavirus.

The Religious Affairs Ministry of Bangladesh announced the move in a statement on Friday.

In order to maintain social distancing during the Coronavirus outbreak, no individuals or institutions will be allowed to arrange or participate in any gathering over Iftar, it said.

Legal action will be taken against those who fail to comply with the order, according to the Ministry.

The government has also decided not to allow more than 12 people in mosques for Ramzan evening prayers this year as the Coronavirus outbreak continues to escalate. The 12 will include senior clerics and other mosque officials.

The mosques’ governing bodies will decide who will be included from the neighbourhood if the quota is not filled for Isha and Taraweeh prayers, State Minister for Religious Affairs Sheikh Md Abdullah told this correspondent on Thursday.

No outsider will be allowed in, if the quota is made up all by mosque officials.

He also said the restrictions on gathering for other prayers in mosques will remain in force.

Currently, the number of people allowed for mosque prayers is five. As many as ten can offer Juma prayers on Fridays.

Muslims in Bangladesh are expected to start the month of fasting on Saturday, a date subject to the sighting of the crescent moon.
Taraweeh prayers will start on Friday evening if the moon is sighted.