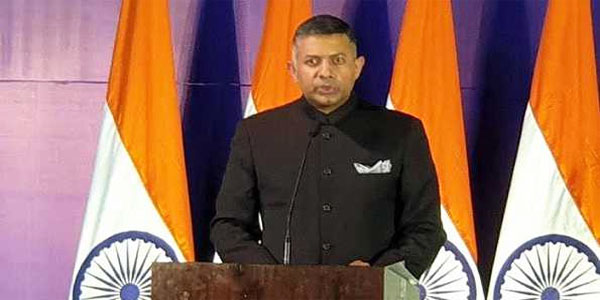 The new Indian envoy to Bangladesh Vikram Doraiswamy has said that if the two countries want to move forward on the path of rapid development, there is no better alternative than mutual cooperation.

No one's development is possible without strengthening the process of self-growth in the warmth of the relationship. Bangladesh and India are no exception to this rule.

"Bangladesh has always been, is and will continue to be a very special partner of India," he told a media briefing at India House in Gulshan the day before.

Vikram Doraiswamy came at a time when Bangladesh is celebrating the birth centenary of Father of the Nation Bangabandhu Sheikh Mujibur Rahman and the people of this country are eagerly waiting to celebrate 50 years of independence next year under the leadership of Bangabandhu's daughter. And keep in mind that next year is also the 50th anniversary of India-Bangladesh diplomatic relations.

Prime Minister of Bangladesh Sheikh Hasina and Prime Minister of India Narendra Modi are visiting each other's countries. The issue of economic partnership has come up again and again in every communication. There is no comparison between the economies of India and Bangladesh.

But if the relationship is built on the basis of economics, in its interest, even if the two countries are not on an equal footing, there is an expectation that they will walk on the path of fairness. Financial relations between Bangladesh and India have been growing rapidly in the last few years.

The two neighboring countries have sincerely resolved various unresolved issues between them and have continued their efforts to do so. The Teesta water deal or the border killings - two issues that have repeatedly raised eyebrows between the two countries. The lack of progress on the Teesta treaty is seen as a failure by the Indian central government. It is also difficult for the Indian government to ignore Bangladesh's concerns about India's citizen registry.

In November, a joint command of the Mukti Bahini and the Indian forces was formed, which led to the independence of Bangladesh. The blood of the Indian army has been shed on the soil of this country for the liberation of Bangladesh.

At the moment, India needs to stand firmly on the Rohingya issue. As I have said before, I am referring again to the Teesta. Bangladesh has not had any agreement with India on Teesta water since 1987. The country is unilaterally withdrawing Teesta water As a result, there is a water crisis in the Teesta basin of Bangladesh.

The Teesta Water Treaty was supposed to be signed on September 6, 2011 during the visit of the then Prime Minister of India Manmohan Singh to Dhaka.

West Bengal Chief Minister Mamata Banerjee was supposed to come to Dhaka then but did not come in the end, nor did the Teesta Accord. Later, during her visit to Dhaka in 2015, Mamata made it clear that Teesta water could not be provided Instead, he proposed sharing the waters of the Torsa River Since then the issue has not been resolved.

Just as India is important to Bangladesh, so is Bangladesh to India. As Vikram Doraiswamy told reporters in Dhaka, "I acknowledge that even the closest relationship needs to be taken care of." There are efforts from both sides. Over the past few years, the two countries have taken steps to further strengthen ties. Rail-road-river communication is much higher today, transportation of goods and number of visas have also increased.

The enclave has been handed over for almost 70 years. Indian Oil of India has launched a joint venture with a major trading company in the country to supply fuel gas to the rural level in Bangladesh. Of the 30 billion in India's financial assistance to developing countries, 8 billion is earmarked for Bangladesh alone. Bangladesh has sincerely implemented every promise made to India.

I have already mentioned the place of discomfort. The way in which the issue of Bangladesh has come up in the proposal of Indian citizenship law or in religious polarization is uncomfortable for our country. India's policy on the Rohingya issue is also clearly at odds with the two countries, which has seen a number of recent initiatives by India.

However, it is important to remember that the connotation of Bangladesh-India relations is not just bilateral, it is multidimensional. The good relations that started with the liberation war in 1971, on the eve of its golden jubilee and on the centenary of the birth of Bangabandhu Sheikh Mujib, will surely stand in a place that will determine the future of the subcontinent.