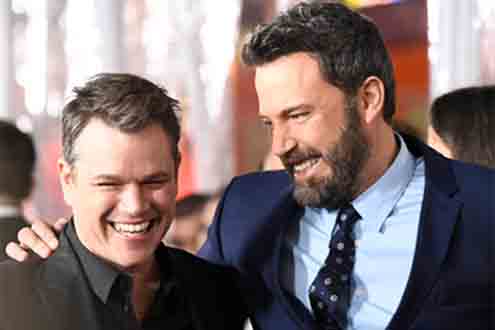 Ben Affleck and Matt Damon's collaboration as writers on The Last Duel remains special given that it's their first after Oscar-winning film Good Will Hunting. The duo is known to be best friends offscreen and in their recent interview with Entertainment Tonight, they opened up on working together again and missing out on the chance of having their first onscreen kiss.
The Last Duel is one of the most anticipated films of the year and is a period drama that is set in 14th century France. While discussing about how the film needed to be accurate when it comes to history and the kind of cinematic liberties they took, Ben and Matt discussed about one particular scene from the film that eventually got cut.
Affleck while speaking to ET, talked about shooting a scene that involved a ceremony which as per history had everyone kissing each other on the mouth. He explained, "In the original actual version of that scene -- the way that ceremony actually took place was that you kissed everybody on the mouth. And we had that in the script."
Damon while reacting to Ben on the same, then joked saying it would have been their first onscreen kiss to which Affleck further added, "It's going to have to wait."
The duo further maintained that director Ridley Scott thought the kiss could be "distracting" and hence the scene was changed to Damon's character, Jean de Carrouges, a knight kneeling in front of Affleck's Count Pierre d'Alençon, a French nobleman.
The Last Duel also stars Jodie Comer and Adam Driver in lead roles and is slated to release in theatres on October 22.