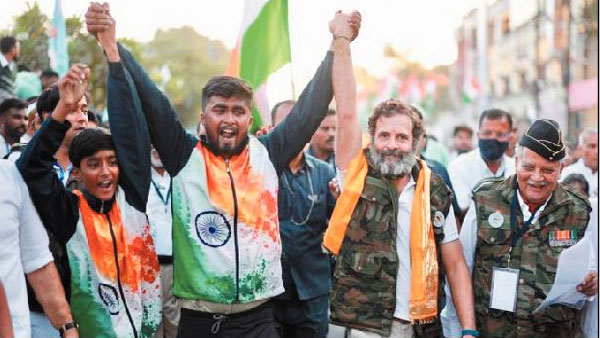 Ujjain: Bharat Jodo Yatra of former Congress President Rahul Gandhi started from Jhalra village of Ujjain district on the tenth day in Madhya Pradesh today, which will enter Agarmalwa district in the forenoon.
The padayatra led by Shri Gandhi started from Jhalra village in Ujjain district around 6 am. Apart from 120 regular pilgrims, State Congress President Kamal Nath, former Chief Minister and coordinator of the Yatra Digvijay Singh, former State Congress President Arun Yadav, State Congress office bearers, hundreds of senior leaders and thousands of workers are also included in the yatra.
The padyatra will take a break after reaching today's first stop at Tanodia village around 10 am. After this, the march will resume in the afternoon and will reach Agar Cantonment Chowk in Agarmalwa district by evening. Today's night stay will be at Kasi Bardia. The yatra will remain in Agarmalwa district on Saturday and Sunday as well and will enter Rajasthan from this district on December 4.
Bharat Jodo Yatra had entered Burhanpur district of Madhya Pradesh from Maharashtra border on 23 November. Since then, this journey is moving towards Agarmalwa district via Khandwa, Khargone, Indore and Ujjain districts.

Issues like Uniform Civil Code are meant to polarize: Jairam
In Agar-Malwa, senior Congress leader Jairam Ramesh today said that issues like Uniform Civil Code are raised at the time of elections to encourage polarisation.
Mr. Ramesh was discussing with reporters at Tanodia in Agar-Malwa district of Madhya Pradesh during 'Bharat Jodo Yatra' of former party president Rahul Gandhi today. During this, he claimed about the question related to the Uniform Civil Code that in 2018, the Law Commission while giving its report to the Central Government had said that the Uniform Civil Code is not necessary. Mr. Ramesh alleged that the report was suppressed at that time.
In this sequence, he said that such issues are raised at the time of elections to encourage polarisation.
Chief Minister Shivraj Singh Chouhan said in a program yesterday that he is in favor of Uniform Civil Code and a committee has been constituted for this.
In the context of Bharat Jodo Yatra, Mr. Ramesh said that the impact of this Yatra is also visible on Rashtriya Swayamsevak Sangh chief Mohan Bhagwat. The impact of the journey is that with whom Shri Bhagwat is meeting and where he is going.
He claimed that many workers of the Sangh also came in this yatra. Both supporters and critics of Prime Minister Narendra Modi are joining the yatra and Mr. Gandhi is welcoming them all.
Shri Ramesh said that today for the first time many ex-servicemen also participated in this yatra.