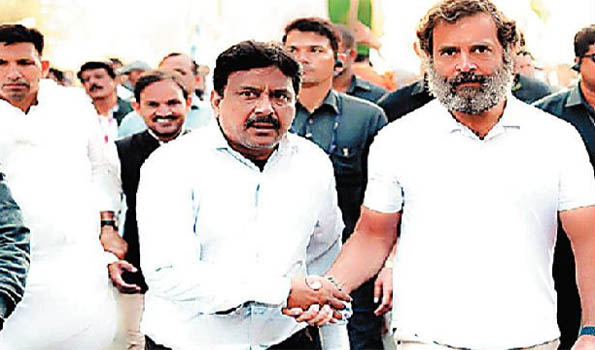 Chronicle Reporter, Bhopal
Bhopal Gas Victim Justice Front’s President Abdul Nafees met former Congress President and MP Rahul Gandhi on Monday and handed over a memorandum requesting him that 38 years have passed since the Bhopal gas victims are being suffering from gas. The government has still not made complete arrangements for compensation, treatment and employment for them till date.
Due to the gas tragedy, cases of serious diseases like cancer, kidney etc. are taking a severe form, for which proper and effective treatment is not provided in the local gas relief hospital. The side effect of this poisonous gas is also testifying in the second and third generation. The central and state government is not paying any attention to this. The Gas Relief Hospital and Bhopal Memorial Hospital and Research Center which is run by the center is also in a pathetic condition, saying that there is a shortage of staff in the gas relief hospitals, the patients suffering from gas are harassed.

Unable to get treatment in hospitals
Bhopal Gas Victim Justice Front President Abdul Nafees informed Rahul Gandhi that the condition of Bhopal Memorial Hospital is very bad, treatment of gas victims is not being done, due to lack of medical staff more than half of the patients are being referred by the units. Such a big institution has become just a referable hospital. Directors do not meet patients. Nor do they listen to any of their problems. Due to which the treatment of gas victims is not being done properly. Abdul Nafees further said that the monitoring committee constituted by the Supreme Court under the chairmanship of Justice VK Agarwal was constituted to listen and solve the problems of the gas victims, but the recommendations of the victims are also not being listened to by the Bhopal Memorial Hospital. Because of which the committee has also submitted a report against Bhopal Memorial Hospital in the High Court.
Abdul Nafees said that after meeting Rahul Gandhi, apprised him about the problems of Bhopal gas victims and urged him to raise the issue of treatment, compensation and employment of Bhopal gas victims in the Parliament because 38 years have passed since the gas victims were suffering from gas. Five lakh seventy two thousand gas victims are struggling for compensation and treatment.