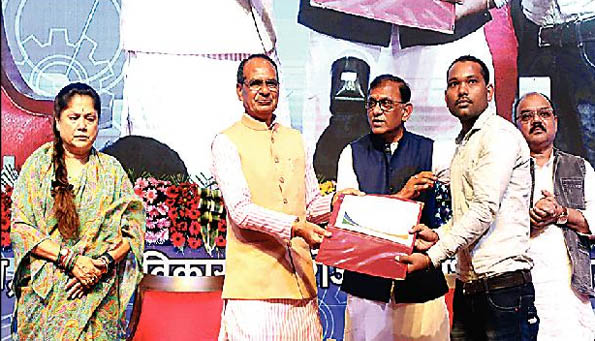 Bhopal: Shivam Chowrikar, 20, who lives in Kolar, Bhopal, will represent India at the World Skills Competition to be held in Kyoto city of Japan next month. Chief Minister Shivraj Singh Chouhan has honored Shivam, who has won the gold medal twice so far, for this success and wished him to succeed in the competition. Shivam, who is pursuing his BTech from LNCT College, Bhopal, designs and installs renewable energy projects in minutes. Due to this, he has got two gold medals.

Will leave for Japan on October 10
Shivam Chowrikar will leave for Japan from Delhi on October 10. After this, he will participate from the Indian side in the World Skill Competition held in Kyoto city of Japan on 15 October. Shivam had held the National Skill Competition in January this year. Students from all over the country participated in this competition. In this competition, the companies give the task of making the project to the participants. According to the task given by the company, Shivam had prepared the project of renewable energy in a day itself. Analysis of the radiation of that location was done through software. After this, the project was prepared and installed and the energy was prepared and shown. Shivam's project came top in all over India.
Shivam Chowrikar said- The World Skill Competition to be held in Japan is also called the Olympics of Skill. It is a huge achievement for me to represent India. This four-day competition will be held in Kyoto. Earlier it was going to be held in Shanghai, China. But could not happen due to Corona. The MP government has cooperated a lot. There are many stops to get to First National. First, the winners of the regional competition and then the national one get a chance to go to the World Skill Competition. Whatever alternative energy sources can be developed to reduce the carbon footprint. How can we develop new energy sources? We are working on it.