Bhuj: The Pride of India song Hanjugam OUT: Ajay Devgn & Pranitha’s love ballad will tug at your heartstrings 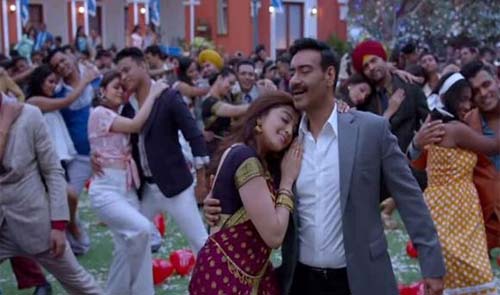 Ajay Devgn starrer Bhuj: The Pride of India has been creating a lot of buzz in the town ever since it was announced. The movie happens to be a period war drama based on Indo-Pak 1971 war. Also starring Sanjay Dutt, Ammy Virk, Sharad Kelkar, Sonakshi Sinha, Pranitha Subhash and Nora Fatehi in the lead, Bhuj: The Pride of India will feature Ajay essaying the role of Squadron Leader Vijay Karnik of the Indian Air Force. While the trailer had opened to rave response from the audience, the makers have now unveiled the first song of the movie.
Titled as Hanjugam, the song is featured on Ajay and Pranitha and happens to be a love ballad. It is a soft track which is indeed a perfect one to express one’s feeling for their loved ones. Sung by Jubin Nautiyal, the song happens to be a soulful, love ballad and Devshi Khanduri’s lyrics with Gourov Dasgupta’s music manages to touch the right chords with millions of hearts. Besides, Ajay and Pranitha, who have been sharing the screen space for the first time, have also been grabbing the attention with their fresh chemistry.
Meanwhile, talking about Bhuj: The Pride of India, the movie will be witnessing a digital release and August 13 this year and will celebrate the 50 years of India’s victory in the 1971 war. Written by Abhishek Dudhaiya, the film is based on real life events during Indo-Pak war of 1971. Ajay will essay the role of Vijay Karnik who was the in charge of the Bhuj airbase during the war and narrates the story of how he and his team had reconstructed the destroyed Indian Air Force airstrip at Bhuj in Gujarat with the help of local women.