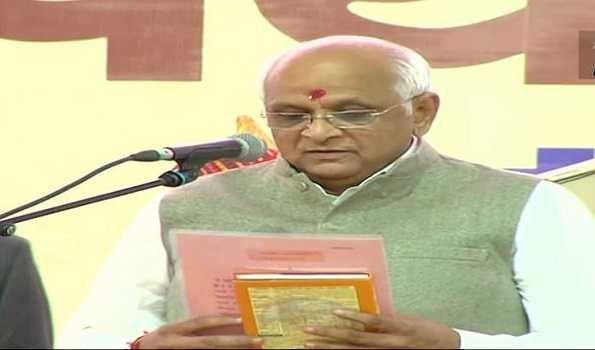 He was on Sunday unanimously elected by MLAs of the BJP in Gujarat as their leader to succeed Vijay Rupani.

Congratulating him, Prime Minister Narendra Modi said: "Congratulations to Bhupendra Bhai on taking oath as CM of Gujarat. I have known him for years and have seen his exemplary work, be it in the BJP Organisation or in civic administration and community service. He will certainly enrich Gujarat’s growth trajectory."

Patel also performed a 'gau pooja' at Swaminarayan Temple in Ahmedabad before the oath taking.

Patel fought from the Ghatlodia seat in 2017 and won with a margin of over 1,17,000 votes against Shashikant Patel from the Congress party. The seat was earlier held by former Gujarat chief minister Anandiben Patel who resigned and later was appointed as a governor.

He belongs to the Patidar community, an economically and politically influential group in Gujarat which is electorally important in the state. Shift of the votes of this community from Congress to the BJP has been called by experts a key factor in BJP continuing in power in the state.

In 2015, Gujarat witnessed agitations by the Patidar community to identify them in the Other Backward Class category. BJP's seats decreasing in the 2017 assembly polls was seen a fallout of the agitation, even though BJP retained power.

Bhupendra Patel is a first-time MLA. Earlier, he has served in the local municipal bodies, also serving as a municipal councillor in Ahmedabad.

He has also served as the chairman of a Standing Committee of Ahmedabad Municipal Corporation and also the Chairman of Ahmedabad Urban Development Authority (AUDA).

Patel also has a long association with the Rashtriya Swayamsevak Sangh.