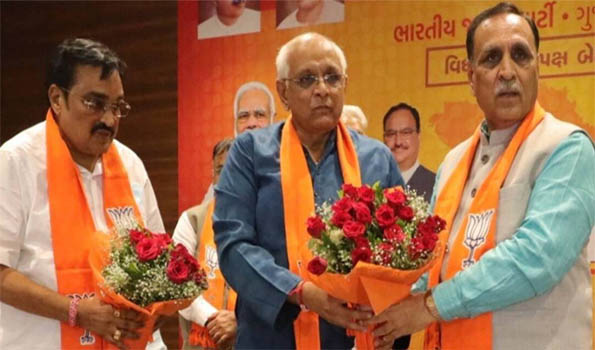 Ahmedabad, Sep 12 (UNI) Ghatlodia MLA Bhupendra Patel was unanimously elected by BJP MLAs to be the next chief minister of Gujarat on Sunday, a day after Vijay Rupani quit the post in a surprise move.

Union Minister N.S. Tomar, who was one of the observers appointed by the BJP for the process of selection, made the announcement. He said Patel's name was proposed by Rupani, who insisted on being the proposer for the new chief minister.

Patel had won Ghatlodia seat with a margin of over 1,17,000 votes against Shashikant Patel of Congress party. The seat was earlier held by former Gujarat chief minister Anandiben Patel who resigned and was later appointed as a governor.

In a surprise move, Gujarat Chief Minister Vijay Rupani resigned on Saturday as Chief Minister of the state leaving people guessing for his successor.

Rupani, 65, represents Rajkot West assembly constituency. He had taken over as Chief Minister of Gujarat in August 2016 when Anandiben Patel had quit the office in the wake of agitation by Patidar community leader Hardik Patel.