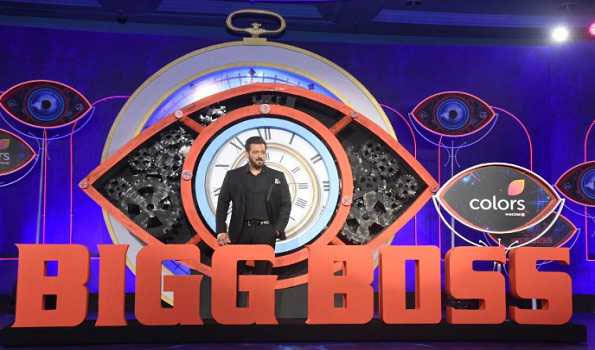 New Delhi, (UNI) One of the longest-running and the cult reality show, ‘Bigg Boss’ is back with a terrific new 16th edition.

Until now, ‘BIGG BOSS’ has essayed the role of a taskmaster, supporter, philosopher, and ultimate entertainer. For the first time, the master of the house ‘BIGG BOSS’ will be stepping into the game in a never-seen-before avatar and challenge the contestants with a playbook of 15 seasons.

The 16th season will crack another big first with an 'Interactive India' episode, through which the viewers will get the opportunity to engage and connect with housemates every week. Bringing his megastar energy, Salman Khan will be revisiting his role as the host of the show.

Nina Elavia Jaipuria, Head, Hindi Mass Entertainment and Kids TV Network, Viacom18, said, “Bigg Boss is one of India’s most celebrated reality shows and enjoys exceptional fandom. A spectacular marvel from our plethora of diverse content, this most anticipated show brings a massive dose of entertainment to our viewers. Extending engagement across all platforms, the show offers a great canvas for advertisers to connect with their target audience. After the grand success of Khatron Ke Khiladi, we aim to keep the entertainment quotient high with an unprecedented season of Bigg Boss.”

“We are delighted to welcome onboard our special partner Ching’s Schezwan Chutney, Make-up Partner MyGlamm, Taste Partner Priya Gold Hunk, Garnier Men and Hershey’s kisses as Associate Partners and look forward to yet another outstanding season. With this exciting new theme, we are certain that this unpredictable season will keep the viewers enthralled,” she further added.

Satiating the curiosity around everything that happens inside the house, ‘BIGG BOSS 16’ will continue to have a 24-hour LIVE channel every Monday to Thursday only on Voot.

This season will also up the interactivity quotient with the ultimate ‘Boss Quiz’ where fans can put their Bigg Boss knowledge to test along with an engaging UGC segment ‘Video Vichaar’ where users are asked to send opinions on matters impacting the house.

Doubling the fun and entertainment, witness a fictional BIGG BOSS fanatic family interacting and playing games with the past and evicted contestants in the all-new show ‘Bigg Buzz’.

Manisha Sharma, Chief Content Officer, Hindi Mass Entertainment, Viacom18, said, “15 years back, Bigg Boss revolutionised the world of entertainment by introducing Indian households to captive reality. Since then, this show has empowered us to experiment, grow, innovate, and unlock an entirely new level of entertainment.”

“With the theme ‘Game badlega, kyunki ab BIGG BOSS khelega’, the idea is to bring a twist to the most loved and authoritative character on the show. We’ve seen Bigg Boss in many avatars over the years and for the first time, he will be seen playing the game. This season, we have an eclectic mix of celebrity contestants from different walks of life. The viewers already love some of them and they’ll get to know the rest of them very soon. We are elated to have Salman Khan bring his star power and a sense of justice to the show once again,” added Manisha.

Salman said, “Coming back to Bigg Boss as a host every year feels like a tradition and I look forward to it. The immense love from the audience, the exciting mix of contestants and the innovative themes undoubtedly make the journey truly special. The 16th season is set to be even more exciting with the theme, ‘Game badlega, kyunki ab BIGG BOSS khud khelega' and will open a pandora of whole new twists. My best wishes to all the contestants, who will take on the challenge of competing with Bigg Boss.”

Rishi Negi, CEO, Endemol Shine India, shared, “The BIGG BOSS of reality shows is back with the 16th season. Our endeavour at Endemol Shine India has been to consistently evolve, reinvent and, revolutionize the format of the show and upping the game, season by season. This year, we will reveal a never-seen-before facet of the show with the mastermind of the house, Bigg Boss not playing by the rules. The diverse mix of contestants will enhance the entertainment flavour as they compete against each other while courting favour of their fellow contestants and audience. We look forward to a great season with the one-and-only Dabangg-host Salman Khan.”

The show will also be promoted in the soon to be released movie, 'Vikram Vedha' across multiplex cinema theatres in Mumbai and Delhi.