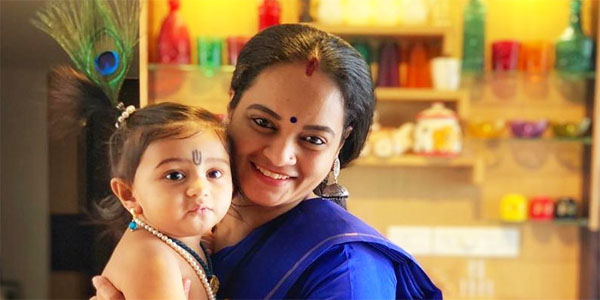 South actress Suja Varunee and legendary actor Sivaji Ganesan’s grandson Shiva Kumar are beaming in happiness ever since they welcomed their baby boy, ‘Adhvaaith’. The proud parents leave no stones unturned to make beautiful memories with their little munchkin.

Bigg Boss Tamil 1 fame Suja Varunee also celebrated the festival, and in the cutest way possible, with her song Adhvaaith. Suja Varunee took to her Twitter handle to share photos of her Janmashtami with her baby boy, and it is all things love. The actress dressed up her little bundle of joy Adhvaaith as Lord Krishna on the special occasion, and he looked cute as a button.

The baby boy is hardly one year old, is seen decked up as Chota Gopal aka Lord Krishna’s avatar. Adorned with a pearl necklace, earrings, anklets, and a flute in hand, Adhvaaith looked too cute for words. Suja Varunee looked beautiful in a royal blue saree as she held baby Adhvaaith in her arms for some mesmerizing pictures. The mother-son duo flashed a wide smile as they posed for the camera.

She also penned down a heartwarming wish for fans on Janmashtami as she wished for love, peace, and happiness in everyone’s life. Suja Varunee tied the knot with to her longtime boyfriend and actor Shiva Kumar in November 2018. The duo was reportedly in a relationship for almost 11 years. Suja Varunee has appeared in Tamil, Kannada, Telugu, and Malayalam films and is known for movies like Milaga, Pencil and Kidaari. Shiva Kumar has featured three films, but he could not make it big as an actor in Tamil film industry.