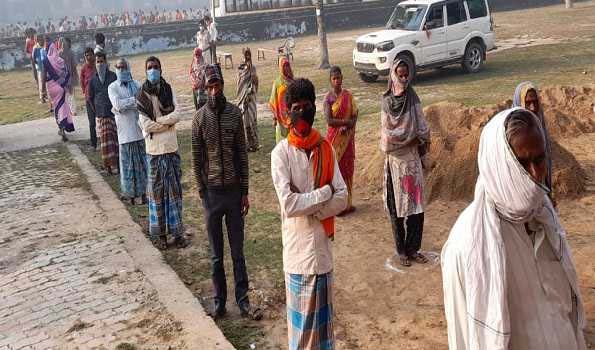 Patna, Nov 7 (UNI) Security forces today opened fired in air to foil the miscreants, attempting to disturb polling at booth number 282 in Dhamdaha constituency of Purnea district while an estimated 34.82 per cent of the total electorate exercised their franchise till 1 PM during third and final phase of of Bihar Assembly elections in 78 constituencies.

Chief Electoral Officer H R Srinivasan told media persons here that jawans of Central Industrial Security Force (CISF) were asking people to stand in queues, maintaining social distancing as per the instructions issued by the Election Commission to prevent the spread of Coronavirus.

Trouble mongers, who had come to the polling booth as voters, started manhandling the jawans of CISF, forcing other security personnel to open fire in air to control the situation, he added.

Mr Srinivasan said that soon after the incident, he spoke to Police Superintendent of Purnea Vishal Sharma, who had gone to the spot, where four trouble mongers were arrested in this connection.

Voting at booth number 282 continued as usual, he informed.

Meanwhile, sources at office of the Chief Electoral Officer said that an estimated 34.82 per cent of the total electorate exercised their franchise till 1PM in the third and final phase of Bihar assembly elections in 78 constituencies where polling was in progress.

As per district wise figures made available by officials, highest polling was recorded in Muzaffarpur district where 40.15 per cent of the electorate exercised their franchise followed by 37.99 per cent in Vaishali district.

Minimum polling was recorded in Darbhanga district where 26.58 per cent of the electorate exercised their franchise.

An estimated 35.82 per cent polling was recorded in Lok Sabha by-elections in Valmiki Nagar parliamentary seat.

A total of 2, 35, 5 4, 071 electorate are expected to exercise their franchise in 78 constituencies spanning across 15 districts of Bihar.

Polling in four constituencies Valmiki Nagar, Ramnagar, Simri Bakhtiarpur and Mahisi will end at 4 PM due to security reasons, while in other constituencies polling will continue till 6 PM.