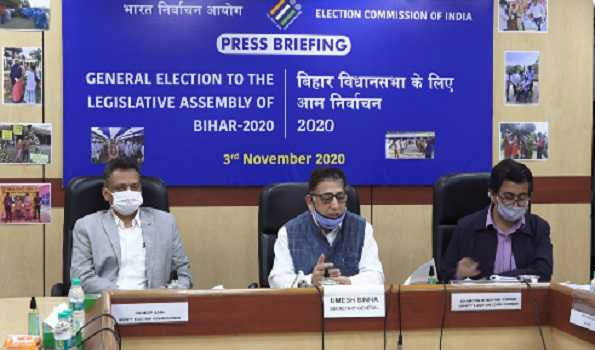 New Delhi, Nov 3 (UNI) Bihar recorded 53.51 per cent voter turnout in Phase 2 of the Assembly polls, the Election Commission said in a briefing on Tuesday.
The poll body said that by and large, the polling process remained peaceful. The combined voter turnout in both phase 1 and phase 2 was recorded at 53.79 per cent till 1700 hrs, the Commission said.The voting began at 0700 hrs for 94 constituencies that were spread in 17 districts. A total of 41,362 polling stations were set up at 18,823 locations.The 2.85-crore strong electorate will decide the fate of 1463 candidates. Notably, 494 nominees out of the total are having criminal antecedents.

The Commission said that 422 Model Code of Conduct (MCC) violations were reported during the second phase of election process. Apart from Bihar, by-elections were being conducted in 10 other states. Chhattisgarh recorded voter turnout of 71.99 per cent, Gujarat 57.98 per cent, Haryana 68 per cent, Jharkhand 62.51 per cent, Karnataka 51.3 per cent, Madhya Pradesh 66.37 per cent, Nagaland 83.69 per cent, Orissa 68.08 per cent, Telangana 81.44 per cent and Uttar Pradesh 51.57 per cent.

The EC said the figures were real time data and subject to change, as the voting had not ended till the filing of this report.