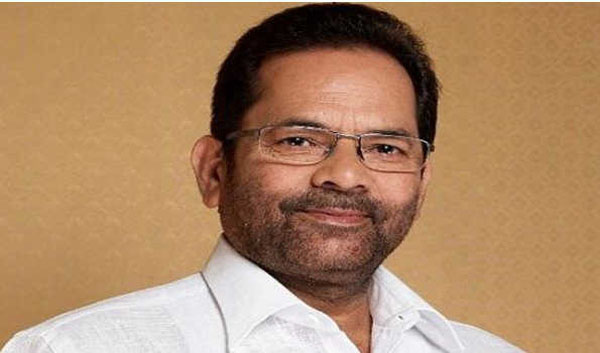 Srinagar, Nov 24 (UNI) Asserting that the rates to perform Hajj-2021 will increase in view of guidelines (social distancing) to curtail the spread of COVID-19 during the pilgrimage, Union Minister for Minority Affairs Mukhtar Abbas Naqvi said that the bilateral agreement between India and Saudi Arabia will likely happen in December.

The bilateral agreement with Saudi Arabia in December will clarify how many seats will be allotted to India for Hajj 2021. As many as 2 lakh people from India had performed Hajj in 2019.

He said over 3,000 women, who had applied for Hajj 2020 without mahram, will be allowed to perform the pilgrimage in 2021. “Hajj-2021 will be held in different circumstance due to COVID-19 pandemic,” Mr Naqvi told UNI in an exclusive interview.

“Hajj will be held in Saudi Arabia… so we have to follow the guidelines issued by the Saudi government. According to the guidelines, only two to three people will stay in a room where seven to eight people used to live. The bus which used to ferry 45 people, will now accommodate only 20 people… there are many other things which will be different in Hajj 2021,” he said.So, he said under these circumstances the rates will automatically increase.“The bilateral agreement with Saudi government is expected to happen in December. We will see how much quota India will get,” he added.

The agreement for Hajj 2020 between India and Saudi Arabia was signed on December 1, 2019, marking a milestone in the relationship between the two countries as India became the first country in the world where Hajj, the annual Islamic pilgrimage to Mecca, will happen entirely through a digital process. However, the Hajj 2020 was cancelled due to the outbreak of COVID-19 pandemic.

Answering a question about the age limit of pilgrims who will be undertaking Hajj-2021, he said the guidelines, including other health protocol, have been set up by Saudi Arabia. “The Saudi government has imposed age limit of 65 for Umrah,” he said.

He said there are other health protocols which need to be followed, adding the pilgrims will have to undergo COVID-19 test 72 hours before undertaking the journey.
However, the Union Minister hoped for the vaccine to be available for use before the Hajj 2021 so that the process will be the same. “Hopefully if by that time COVID-19 vaccine will be out in the markets then everything will be fine,” he said.

He said about 3000 women, who had applied for Hajj-2020 without mahram, will be undertaking the pilgrimage with fresh applicants. But, he said the only condition is that they should be below 65 years of age.