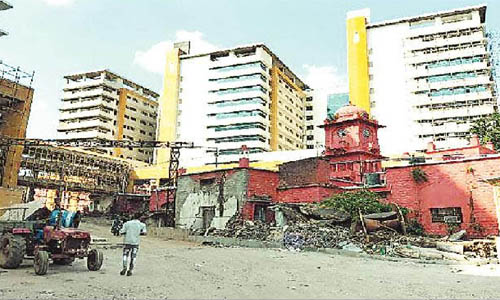 Patients will get 24 hours hot water facility
Chronicle Reporter, Bhopal
Block-B has almost been completed by PIU in one of the new buildings of Hamidia Hospital, which is affiliated to Gandhi Medical College (GMC) in the capital Bhopal.
A new deadline has been fixed to hand over it to the hospital management on November 24. Now the furnishing work is going on in the 620 bed lower ground 12 floor building. In this building, the pediatric departments of Hamidia Hospital, Ophthalmology and Sultania Hospital will be shifted. The new building has many specialties. There is a nurse call system at each bed. So that the patient will be able to call the nurse or staff if needed, by pressing the panic button fixed near the bed. In this, smoke extractor exhausts have been installed for fire safety in the building, which will immediately expel the smoke out of the building. There are special arrangements for fire safety and electric safety.
This facility will also be there
Building Management System (BMS) is installed. With this, the person monitoring the server room will immediately know about the failure of Light, AC or any other electronic device in the building. Patients will get 24 hours hot water facility. Here a provision has been made to install solar panel system on both the buildings.
Features of PSA System
The building has the facility of Public Address System (PSA). With the help of this, there will be an announcement facility in the entire building. There will be a private ward of 100 beds on the 4G floor. There will be single double deluxe rooms. In Block-B, there will be a ward for Pediatric, Gynecology and Ophthalmology on the 10th floor.
Lecture
Theater with seating for 300 people on 12th floor Being a teaching hospital, each floor from 5th to 11th floor of Block.2 is divided into four parts. The ward is in two parts. Teaching area has been made in one part and waiting area in other part. Lecture Theater for 300 people has been built on the 12th floor. Central line fire fighting system has been installed in the entire building to prevent incidents of fire.
479 crore project
Initially Rs 436 crore was approved for the new building of Hamidia Hospital. Its work order was issued in 2016-17. Its deadline has been kept for the year 2018-19. At the same time, due to many changes in the building, the budget was revised and increased by Rs 479 crore. It was extended 11 times for different reasons. In this, Block-1 is being built at a cost of about Rs 165 crore. Block-2 was sanctioned at a cost of Rs 126 crore and rest for the development of Nursing Hospital cum College, Multilevel Parking, Girls Hostel and Campus. The capacity of both these buildings is about 1500 beds.