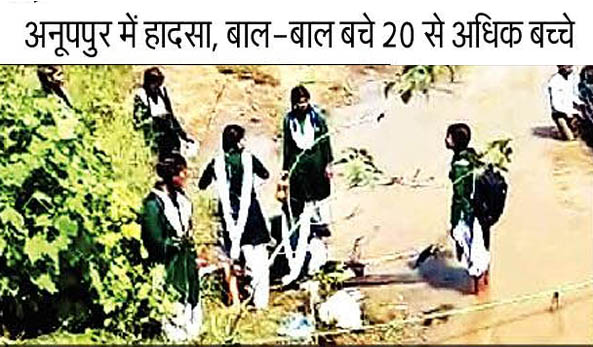 Bhopal: A boat carrying school children capsized in Anuppur on Thursday. The accident happened near Bakeli village. However, the rescue team has saved all the children. Sailor Jagdish Kewat told that he was going to drop the school children at 10 am as usual.
Students of class IX to XII were sitting in the boat. After sitting the students from Bakeli village, the boat reached the other end of the Son river, only then the students started trying to land. In this flurry, the boat got into the water uncontrollably. There were 18 girls and 2 boys in the boat.
While saving all the students from drowning, the sailor grabbed each other's hands and pulled them out of the water. This information was given to the Kotwali police. Police force including Superintendent of Police Akhil Patel has reached the spot.
Villagers told that the children of about 10 villages including Bakeli, Podi, Kodayali, Khada, Manpur go to the Government Higher Secondary School in Chachai of Gram Panchayat Calhori. Many of these children cross the river by boat. The boat fare is Rs 20. Even today the children were going by boat, when it got uncontrolled and got into the water. Thankfully all the children are safe.