Bureaucracy is nothing, it is one who lifts the slippers 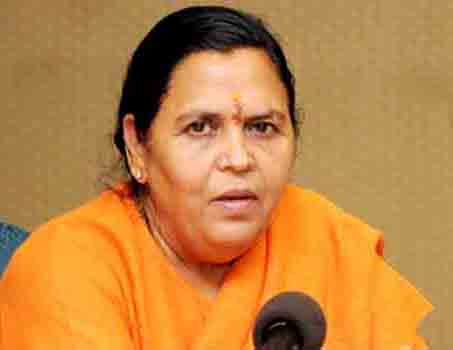 Chronicle Reporter, Bhopal
Bad words of BJP's stalwart Uma Bharti have come to the fore. Uma said that bureaucracy has no place, it picks up her slippers. This video of her went viral, after this video went viral, she has come under the target of the opposition.
The troubles of the former Chief Minister of MP and the BJP may increase. On Monday, a video of her went viral, in which she is seen making a statement against the bureaucracy. After this video went viral, she has come under the target of the opposition. Congress has demanded clarification from BJP leaders on the matter. This viral video is being told of Uma Bharti's Bhopal residence. Some delegations had come to meet him on the issue of OBC reservation. Meanwhile, someone raised a question on bureaucracy, then BJP leader Uma Bharti said – Bureaucracy is nothing, it is about lifting slippers. The bureaucracy picks up our slippers, we are told that you will have a big affair, if this happens, what does it feel like the bureaucracy turns the leader. Talks happen in private, then the bureaucracy makes a file and brings it. I have been a minister, chief minister for 11 years, first we talk, then the file is processed. What is the function of bureaucracy? We are giving them salary, we are giving them posting, we are giving promotion and demotion. We do our politics on the pretext of bureaucracy.
Benefit only if reservation is available in private sector: Uma Bharti further said that nothing will be gained from reservation. When there will be no reservation in the private sector, then there will be no benefit. Governments have handed over the land to the private sector. Now put pressure on the private sector for reservation.
I regret on my vulgar language: Uma
Former Chief Minister of Madhya Pradesh Uma Bharti has now clarified on the statement given on bureaucracy. She had told the bureaucracy that the bureaucracy is the one who lifts the slippers. After the video of the statement went viral, Uma Bharti has made several tweets. She wrote in the tweet that I am sorry that I used rhetorical language, while my expressions were good. I learned this lesson from today that moderate language should be used even in informal conversations between limited people. On the statement given on bureaucracy, Uma Bharti said that while the truth is that honest bureaucracy supports a strong, true and well-intentioned leader sitting in power. This is my experience. Some of us leaders, the incompetent leaders sitting in power, take the guise of bureaucracy to avoid their inefficiency that we are very good but bureaucracy does not allow our good work to be done. Uma Bharti while thanking the media said that I am grateful to the media that they showed my entire video because I was speaking in defense of bureaucracy. The day before yesterday at my residence in Bhopal, I met a delegation of backward classes. This meeting was not a formal one. The video of that entire conversation has gone viral in the media.