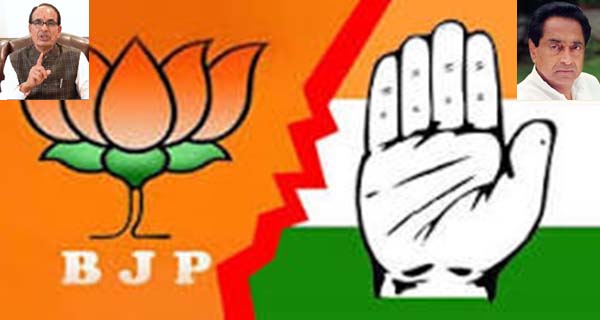 Chronicle Reporter, Bhopal
For the victory in the by-election, both the major parties of the state BJP and Congress are throwing their full strength. Chief Minister Shivraj Singh Chouhan on Monday said that no stone will be left unturned for the development of Jobat in the Bharatiya Janata Party government, which he himself guarantees. Chouhan was addressing an election meeting at Ambula under Jobat Assembly constituency in the district. During this, BJP State President Vishnu Dutt Sharma, Union Civil Aviation Minister Jyotiraditya Scindia, Minister Govind Rajput, Rajvardhan Singh Dattigaon, Former Minister Ranjana Baghel, Nirmala Bhuria, Madhav Singh Davar, Nagar Singh Chauhan, MP of the area Guman Singh Damor, Khargone MP Gajendra Singh Patel, Omprakash Saklecha, MLA Ramesh Mendola, Mahendra Sisodia, Yashpal Sisodia, Kal Singh Babar and candidate Sulochana Rawat were present. The Chief Minister said that our government will do all the work whether it is big work or small work. Your 'Mama' takes the guarantee of Jobat, will build roads, provide electricity, install taps in every house, build bridges and culverts, farmers will get Narmada water. Our government guarantees the education of children. CM State Schools will be opened, in which children will get full facility, Ayushman cards are being made, whose cards have been made and which have not been made.
BJP is a party of capitalists: Kamal Nath
Senior Congress leader and former Chief Minister Kamal Nath said that Congress party is a party of tribals, whereas BJP is only a party of capitalists. Kamal Nath was addressing the election general meeting organized in support of party candidate Mahesh Patel at Bhabra in Alirajpur district on Monday. He said that Congress is a party of tribals, whereas BJP is only a party of capitalists. Counting the achievements of the previous Congress government, he said that we supported the farmers. He said that the farmers were given bonus. It was the beginning of revolution in the field of agriculture. He said that In Alirajpur district Congress has waived the loans of 31 thousand farmers. He said that the Congress government had given 100 units of electricity for 100 rupees. He said that the BJP government can buy and sell only by paying money, but I am sure that you will support the Congress party and send Congress candidate Mahesh Patel to the assembly after winning. Senior Congress leader and MLA Kantilal Bhuria said that Congress gives respect to tribals. . He said that support the Congress and make Mahesh Patel victorious by voting for the Congress on the coming 30th October. On this occasion, along with Jhabua MLA Kantilal Bhuria, many Congress officials and workers including Vinayak Omkar Makram and Bala Bachchan were present.