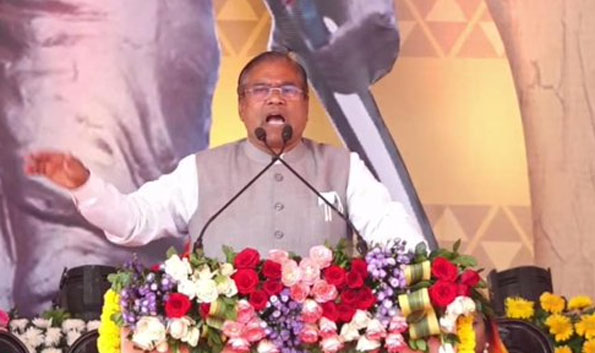 Khargone: Union Minister for Steel and Rural Development, Faggan Singh Kulaste has said that the Congress has definitely elected a president from the Dalit community, but all the Congressmen are following Rahul Gandhi bypassing him.
Mr. Kulaste, who came to Khargone district in connection with the Gaurav Yatra yesterday, in a discussion with reporters at the Circuit House, said about the alleged comment on Prime Minister Narendra Modi that he knows what Congressmen speak, but it is clear that making a Dalit president is a sham. He said that the Congress is following Rahul Gandhi bypassing the Dalit President. He said that the Congress is being run by remote control, and is not in a position to control it.
In response to a question, he said that the Congress is in a bad condition all over India and the sensible people of the Congress are running away from it. Taking a dig at Rahul Gandhi, he said that the way he is going to Babasaheb Ambedkar, Ujjain's Mahakal and other places, may God give him wisdom.
He clarified that the 'Gaurav Yatra' organized by the Bharatiya Janata Party to honor tribal leaders has nothing to do with the 'Bharat Jodo Yatra' of the Congress. He alleged that Rahul Gandhi's ancestors worked to break and divide India by creating Bangladesh and Pakistan.
He said that the Congress never mentioned the contribution of tribal leaders in the freedom struggle, while the Bharatiya Janata Party revived their honor through various programs and permanent memorials. In this episode, the decision to implement the PESA Act in the presence of President Draupadi Murmu and the organization of Gaurav Yatra in the Amrit Mahotsav of Independence are included.
He said that today the Congress is talking about connecting India, while the government under the leadership of Prime Minister Narendra Modi of the Bharatiya Janata Party has taken a time-bound program to provide basic amenities of water, electricity, housing, roads and connectivity to every poor in every village. And due to moving forward with all the criteria of real progress, India is getting fame in the country and abroad.
Prior to this, Shri Kulaste also addressed the program related to Gaurav Yatra at Jhirnya in Khargone district.